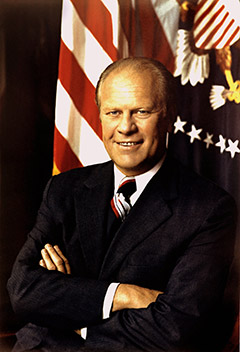 Gerald Ford grew up in Grand Rapids, Michigan, where he was a star athlete. He earned a bachelor’s degree from University of Michigan, followed by a law degree from Yale in 1941. He served in the U.S. Naval Reserve from 1942 to 1946, attaining the rank of Lieutenant Commander, afterward continuing law practice until the start of his political career in 1948 – the same year that he married Elizabeth “Betty” Bloomer. Ford was an Albion College trustee from 1963 to 1968 while he was serving in the U.S. House of Representatives, and was chosen as House Minority Leader in 1965. He dedicated the Gerald R. Ford Institute for Public Service* in 1977, soon after serving as the thirty-eighth president of the United States following the resignation of Richard Nixon.

Ford believed in ethical leadership and cooperation among those with differing political ideologies, in order to promote healthy and positive progress for our nation. In creating the Ford Institute at Albion, he entrusted to us the responsibility of fostering growth in our future leaders.

*Since its dedication, the name has changed to the Gerald R. Ford Institute for Leadership in Public Policy and Service