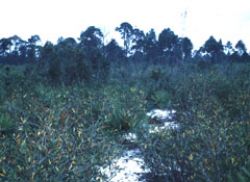 The Central Florida Highlands, including the Lake Wales Ridge, formed as a series of sand dunes during a high stand of sea level during the Pleistocene. In addition

to reminding us of the potential consequences of global warming, this area is habitat to a remarkable number of rare species, which trace their ancestry to tropical species to the south. Now isolated, they have adapted to the dry, sandy conditions of the area. Dwarf species are common; the shrubs shown below include species of oak.

These native species are threatened by development and agriculture. When irrigated, this environment is well suited for citrus, and many golf resorts are going in around lakes present in natural depressions in the area.

Shown below, our group is breaking camp at Highlands Hammock State Park, preparing for a day at canoeing down Juniper Run 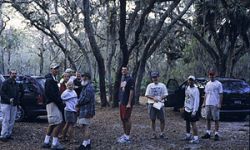