Due to public health concerns related to COVID-19, the event, originally scheduled for April 17, will be postponed to the fall on a date to be determined. When those details are set, additional announcements will be made. 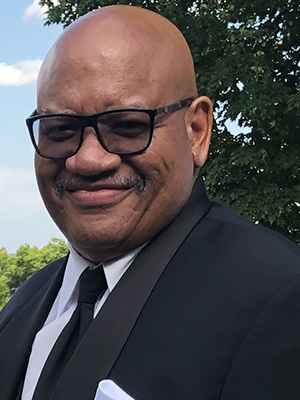 Dr. Darrell K. Williams, '77, will receive the inaugural James L. Curtis Alumni Leadership Award.For Darrell Williams, '77, leadership skills seem to have followed him since his days as a youngster in Inkster, Mich., eventually settling around him like a cloak.

"When I grew up I was always watching leaders and I was behind leaders watching them and seeing what they did," he says. "When the time came for me to be a leader, I knew how to step into that position. I remember in the fifth and sixth grade, I was in the safety patrol—you know you got to wear those orange belts that went over your shoulders. And you would tell a kid when they cross the street, and if he didn't listen to me I could go to his classroom and report him."

He laughs at the memory.

He learned much of those often indefinable skills from watching his parents, Troy and Shirley Williams, and from his uncle Dr. Regnal Williams, who encouraged Darrell to stretch his boundaries and attend a college he'd never heard of before—Albion.

That pattern continued for Williams when he came to Albion College, intent first on studying chemistry until he actually took a chemistry class and realized that it might not be for him.

He eventually majored in psychology, played football for the Britons, weathered a campus environment in which he was one of only a handful of African Americans, and went on to study dentistry at the University of Detroit. He would then embark on a lifetime of service to his native Detroit area, practicing dentistry for all, helping the community raise money and always keeping in mind just how important Albion has been in his life.

Those leadership and life skills have led to Williams being named the recipient of Albion College's inaugural James L. Curtis Alumni Leadership Award. The award is named after Dr. Curtis, ‘44, who became a highly regarded psychiatrist in New York and has been an inspiration for his community and alma mater since retiring to Albion in 2003. The award was created by the College's Black Alumni Chapter in collaboration with the divisions of Institutional Advancement and Student Development, respectively.

Williams will be presented with the award during the annual Alumni Awards ceremony, concurrent with the presentation of the Distinguished and Young Alumni Awards.*

And while honored and humbled to be the first recipient, Williams insists he's done nothing special.

"It means a lot to be recognized by someone like Dr. Curtis," he says. "It means I've done something that someone has recognized and they're thanking me for doing it. It's special because it recognizes some of the things you do. Those things don't go on billboards."

Milton Barnes, '79, Albion's director of student success initiatives, nominated Williams for the award and believes he's an ideal representative for what the award represents.

"The College has made an obvious commitment to its diversity and a diverse campus," he says. "And I think in order to continue to support and reinforce that importance, the Black Alumni Chapter has decided it wants to be hands-on in trying to make sure that legacy continues. Dr. Curtis exemplifies all the things that we want in our alums and in our students." 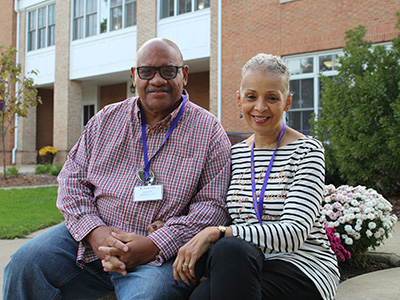 Darrell with his wife, Yolanda, at Albion College Homecoming in 2017.Barnes worked for weeks with Darrell's wife of 37 years, Yolanda Toran Williams, to gather letters of recommendation and background information on her husband—all without him knowing about it.

"Milton said, ‘I need your help in getting letters together and information on Darrell,'" she says. "It was kind of difficult because we had other things going on and sometimes Milton would call when I was sitting next to Darrell. I'd say, ‘I'll call you right back' and Darrell would ask, ‘Who was that?' And I'd lie and say, ‘Oh, just someone from church.' I felt I was playing this game of cat and mouse. But it all worked out and I'm extremely happy for him. He's extremely worthy."

‘Because of the Person He Is'

Williams still practices dentistry with Advantage Health Care Centers, providing his services to underserved communities in the Detroit area. He also provides free dental screenings and referrals for elementary schools in marginalized Detroit neighborhoods. Additionally, he works with local youth, volunteers his time, created with Yolanda the Troy & Shirley Williams Scholarship to help minority students at Albion, and in 2014 was ordained as an elder in the Faith Tabernacle Worship Ministries in Southfield.

"Dr. Williams continues to inspire me today with his drive for knowledge and leadership," wrote Dr. Pamela Bradford, a dentist at the Wayne County Juvenile Detention Center, in one of the nomination letters on Williams' behalf. "Dr. Williams is a leader in the dental field, as well as in the community."

And he has continued his efforts even after battling cancer in 2015 and recovering from a heart attack in 2017.

"This award is very special," he says.

Read more about Darrell and Yolanda Williams in the Fall-Winter 2017-18 edition of Io Triumphe! magazine

*UPDATE: The Alumni Awards ceremony, originally scheduled for April 17, has been postponed to the fall due to COVID-19 precautions.