Albion College’s innovative curriculum includes the Foundation for Undergraduate Research, Scholarship, and Creative Activity (FURSCA) where students receive funding to pursue independent study in their area of interest. Holly Farris, ’12, a physics major from Montague, Mich., continued to develop her interest in astronomy by constructing an 8” reflecting telescope with items that can be found in any hardware store.

Following design specifications from John Dobson of the Sidewalk Astronomers, working around the schedule in the College’s carpentry shop, and asking for guidance from physics professors Aaron Miller and Nicolle Zellner, Farris completed a functional telescope in five weeks. The telescope has allowed her to view the craters on the Moon, the rings of Saturn, and a binary star system (two stars orbiting around each other). 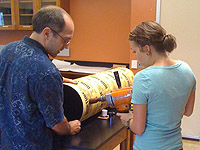 Physics professor Aaron Miller and Holly Farris drill a portion of the telescope.“I have always liked to build things and play with tools,” said Farris, who is also completing a minor in art. “I know you can buy kits to build your own telescope, but I think what made my project so successful was [that] I had the ability to test a lot of things by trial and error.

“Building a telescope really helped me understand how they work,” she added. “With our big professional grade telescopes on the roof of Palenske, you can’t see inside of them, what the light is doing when it enters. Building a telescope from the inside out was eye-opening, and I can explain the advantages and disadvantages of different types of telescopes. I also learned how to be creative and innovative.”

Farris noted finding the material to keep the mirror level proved to be a challenge. She used wood, duct tape, and foam material before deciding on bolts to hold it in place.

Unlike the telescopes the College has placed on the roof of Palenske Hall, Farris’ telescope does not have a computer system to set the coordinates of the objects she wants to view. While Farris’ project includes a base allowing the telescope to swivel horizontally and arms to tilt vertically, the lack of computerization has helped her learn the sky.

“It’s fun to play with a manual telescope,” Farris said. “I could plug coordinates into a GPS system on a computer-operated telescope, but I don’t learn where the star is in the sky.

“Using the computers and finder scopes on the College telescopes can take 15 to 20 minutes to hunt down one star, if the telescope is not properly aligned. I can see three objects an hour as opposed to seven or eight,” she added. 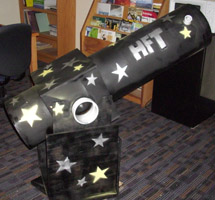 Farris' finished telescope is on display inside the Science Complex.While Farris’ telescope is functional, she is considering applying for additional FURSCA funding to purchase an adapter that would link to a digital camera or filters that would allow her to view the sun or gases emitted by stars.

In addition to building the telescope, Farris learned to appreciate the history of astronomy atop Mount Wilson in Pasadena, Calif., while participating in the Consortium for Undergraduate Research and Education in Astrophysics (CUREA) for two weeks in August.

“They have 11 telescopes there, and over half of them are original from 1908,” Farris said. “They have a 100-inch telescope that was the biggest in the world for 30 years. Hubble developed his theory for an expanding universe using their telescopes, and Albert Einstein was a frequent visitor.”

Farris said the first week of the CUREA program was intensive as the seven students received lectures about the sun, astrobiology and black holes during the day while honing observing techniques and taking images in the evening. Students spent the second week writing proposals for their own projects.

“I picked a project that I could possibly continue at Albion and start putting together my senior Honors thesis with some of the data,” Farris said. “My project was imaging standard stars that a famous astronomer named Landolt discovered. I took pictures of the stars in red, green, and blue filters and then I used simple algebra to create equations that would transform them into photometric colors.

“Collecting and analyzing data [from the telescope] is something I had no experience with before taking part in the CUREA program,” she added.

Back on campus for the fall semester, Farris is looking to position herself toward a career in exploration. NASA’s Jet Propulsion Lab (JPL) was among the sites she visited during the CUREA program, and she is planning to apply for an internship at JPL with the hope of working on the mission exploring Saturn or on extrasolar planets which are planets beyond our solar system orbiting around stars.{jcomments on}