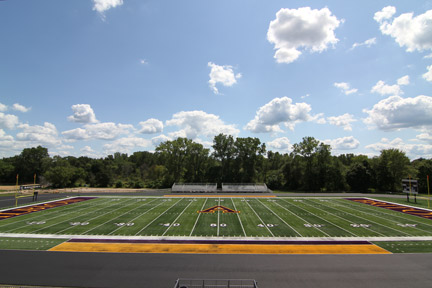 A goalpost-to-goalpost view of the new field.

The Albion College football and track and field teams will enjoy upgraded facilities for years to come after the Board of Trustees approved $1.1 million for installation of new football and track surfaces and other improvements in Sprankle-Sprandel Stadium in the summer of 2011.

Quarterback Spencer Krauss, ’13, says there is a new atmosphere of excitement as the Britons compete for the first time on the new artificial turf to be dedicated in honor of former Briton coaches Pete Schmidt and Morley Fraser.

“It’s beautiful out there,” he explains. “Everything’s colorful. It looks great. The new field will make the football games a more lively experience. We’re hoping to draw some big crowds with people interested in seeing the new field. The bigger the crowd, the more excitement in the air—that can only increase our chances of playing well.”

He adds, “We’re grateful that we get the opportunity to play in such a great facility.”

The improvements in Sprankle-Sprandel Stadium, including the installation of state-of-the-art synthetic turf on the football field and the resurfacing of the varsity track, are part of a $1.1-million upgrade of Albion’s outdoor athletic facilities carried out this summer. It represents the first phase of a multiyear effort to improve the College’s playing fields and indoor spaces for varsity and intramural competition.

“In implementing the College’s master plan for the campus, the Board of Trustees has given full support to the athletic facilities upgrades,” observes President Donna Randall. “We completed the renovation and expansion of the science complex in 2006, and this summer we have undertaken a significant renovation in Stockwell Library to better accommodate the needs of today’s students. Now it’s time for us to turn our attention to our athletic facilities.”

This investment in Briton athletic programs signals the College’s recognition of the importance of sports competition for many of our students as part of their total Albion experience.

“Facilities are a way for a student-athlete to see that there is a strong commitment to their success,” says athletic director Matt Arend. “If you have high-quality facilities on a par with your peers, that makes recruiting the top student-athletes easier. With these improvements, we can offer not only a great education in superb academic facilities, but we can complete the equation with first-rate athletic facilities. We are confident that we will see the benefits of this approach in higher enrollment numbers. Beyond that, these upgrades will build pride in our athletic programs and help our teams become even more competitive in winning conference championships. ”

Albion has a tradition of athletic success built, in large measure, around iconic coaches who have not only made their mark by their win-loss records, but more importantly for the way they have served as mentors to their athletes. Schmidt, who amassed a 104-27-4 record at Albion along with nine league titles and who led the Britons to the 1994 NCAA Division III national football championship, was one such coach. He passed away in 2000 after a yearlong battle with lymphoma.

Earlier this year, his former players, led by Kyle Klein, ’97, Paul Elder, ’87, Scott Merchant, ’93, Hank Wineman, ’92, and former head men’s track & field and assistant football coach Dave Egnatuk, ’71, began a fundraising drive to rename the football field to honor Schmidt’s legacy. The field held the name of another legendary Briton football coach, Morley Fraser. Liz Fraser, Morley’s wife and a loyal Briton fan in her own right, has given her support for the renaming. The fundraising project, which has a goal of $500,000, helps underwrite the installation of the stadium’s artificial turf.

“As alumni athletes who played for Coach Schmidt, we share a common bond,” Klein says. “Many of us credit our athletic experience as much as our academic experience for our success in life. Participating in this project is a wonderful way to honor the coach who has had such a large impact on our lives as well as providing outstanding facilities for our student-athletes now and into the future.”

Watch our time-lapse video of the summer upgrades