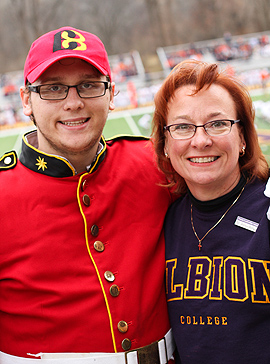 Karen Kline, ’83, never had a doubt that she would attend Albion College.

Kline’s father, Patrick Pugh '56, returned to campus to help direct the marching band in the mid-1970s. Karen would come to campus to watch football games and watch her father direct the British Eighth. But even before that, she remembers Albion-related family conversations with her grandfather, Otto Baur, ’26.

"Attending Albion was never a question," Karen says. "I didn't apply anywhere else. I felt at home on campus."

Now her son, Daniel Kline, ’15, attends Albion and marches with the British Eighth – just as she did. And her oldest son, Jeff Kline, ’10, was involved in the music program as well.

Together, the Pugh-Kline family makes up four generations of proud, dedicated Britons. Giving back to Albion is what this family does.

The Kline-Pugh legacy story mostly goes through Karen’s side of the family, but all members of the family have given back to their alma mater.

Kevin Kline, ’81, was a first-generation Briton. He remembers hearing about Albion College through his Methodist church in Saginaw.

"I didn't apply anywhere else," he says.

He met his future wife, Karen, at a Union Board movie showing. After that initial introduction, Kevin and Karen kept running into each other on campus. They started dating a few weeks after that.

"One memorable date was an evening walk through the Whitehouse Nature Center," Karen says. "We were engaged just before my junior year and married six weeks after my graduation."

When the Klines had children, Albion continued to be a part of their life. Of the Kline family children, two out of three – Jeff and Dan -- ended up at Albion College.

"When the boys were growing up, sharing memories and stories of Albion was pretty common with five graduates in the family," Karen says. "Neither of the boys applied anywhere else. They only considered Albion."

But Dan says there was no pressure – just gentle encouragement.

"While my parents always recommended Albion, they encouraged me to look elsewhere and go where I want," Dan says. "But Albion was always on my radar."

Dan was drawn in by the campus tour and quality academic departments. Now he’s a member of the British Eighth, just like his grandparents and parents.

"I will not forget the first time my mom watched her grandson march across the football field as part of the British Eighth," Karen says, "the same band her husband and daughter marched in. She teared up with joy and pride."

The Pugh-Kline family sees the Albion connection as a deeply-rooted family tradition going back four generations.

"Now that the boys are Britons, we share old memories and are making some very wonderful new ones," Karen says. "And the boys have relished being a four-generation family. It is a special thing to claim."

The spirit of service continues in the Kline family. Karen’s father, Patrick, earned a Distinguished Service Award. Today, Kevin serves on the Alumni Association Board, and Karen has recently joined the Parent Leadership Council.

"It is a pleasure, and truly fun, to be able to give back to Albion," she says.