The James L. Curtis Alumni Leadership Award recognizes Black alumni that have made significant contributions of time and effort to Albion College and its students. 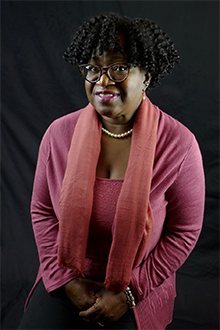 Newly retired this summer, Coletta spent the past 14 years with Common Ground Sanctuary, a behavioral health agency focused on youth and families in crisis. Thomas joined Common Ground as an inpatient and outpatient therapist at their runaway shelter, then moved to directing the crisis assessment team and the mobile services and crisis telephone line programs. Coletta taught for 25 years at the Detroit Institute of Commerce, General Motors Pontiac Skills Center, and the Michigan School for Professional Psychology, where she earned her own Psy.D. in clinical and humanistic psychology. Coletta has served on Albion’s Board of Trustees, headed the Alumni Board, established the Black Alumni Chapter Facebook page, served as an Admission volunteer, and been active with capital campaigns and a presidential search. A certified master gardener who also holds a certificate in Detroit/Motown style ballroom dancing, Coletta shares her Beverly Hills home with son Quinn Thomas, ’01, a psychologist in private practice.

Williams practices dentistry with Advantage Health Care Centers, providing his services to underserved communities in the Detroit area. He also provides free dental screenings and referrals for elementary schools in marginalized Detroit neighborhoods. Additionally, he works with local youth, volunteers his time, created with his wife, Yolanda, the Troy & Shirley Williams Scholarship to help minority students at Albion, and in 2014 was ordained as an elder in the Faith Tabernacle Worship Ministries in Southfield. 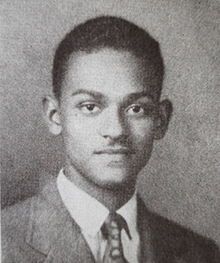 Dr. James Curtis during his time as a student at Albion College

Dr. James Curtis grew up in Albion, received his biology degree from Albion College in '44 and his M.D. from the University of Michigan in '46. Thus began a successful career in psychiatry. Mostly based in New York, Dr. Curtis' research and service to students and patients fueled his rise to become clinical professor of psychiatry at Columbia University, associate dean of Cornell University Medical College, and director of psychiatry at Harlem Hospital Center. Additionally, his commitment to many professional organizations established Dr. Curtis as a true leader in his field.

In 1968, Dr. Jim Curtis was presented the Distinguished Alumni Award from Albion College. He returned to Albion following his retirement in 2003 and continues to play a vital role in the life of his hometown community. In 2008, he received the Distinguished Alumni Award from Albion High School; in 2014 he received an honorary doctor of science degree from the University of Michigan.

To this day, Dr. Curtis is deeply involved—and invested—in the success of children from Albion. In recent years, he has directed his endowed scholarship at the College to benefit area students, including those participating in the Build Albion Fellows program, which since 2015 has provided full tuition, housing and meals to more than 30 students who attended local public schools in exchange for service in the community.