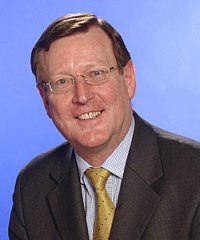 “A Nobel Laureate's Perspective on the Middle East”

Northern Ireland leader David Trimble received the Nobel Peace Prize in 1998 following the historic Belfast Agreement in April of that year that led to a peaceful resolution of the conflict in his native country. He shared the award with John Hume. The Belfast Agreement mapped out a power-sharing arrangement between unionists and nationalists in Northern Ireland, repaired relationships between Northern Ireland and the Irish Republic, and between Ireland and Britain, and set the agenda for a lasting peace.

After a distinguished career as a law faculty member at Queen’s University in Belfast, Trimble entered politics in 1990 and became the leader of the Ulster Unionist Party in 1995. His success in establishing the peace agreement led to his election as first minister of the Northern Ireland Assembly in 1998. Trimble was re-elected as first minister in 2001.

In 2006, Trimble was created Lord Trimble of Lisnagarvey and assumed a seat in the British House of Lords. He joined the Conservative Party in 2007. His tenure in the House of Lords has been marked by a particular interest in the progress of the Israeli-Palestinian negotiations as well as British-Irish political relations.

In accepting the Nobel Prize, Trimble expressed his admiration for the "politicians of the possible," those who through the course of history have sought "to make a working peace, not in some perfect world, that never was, but in this, the flawed world, which is our only workshop."

During the Calvaruso Lecture, Trimble will share the lessons he learned in negotiating the Belfast Agreement, showing how they may hold the key to ending the similar conflict between Palestine and Israel, and between the Sunnis and the Shiites. How do warring factions of different political and religious beliefs, with generations of violence toward each other, move toward disarmament; and how do they do it with words, not weapons? What needs to be the catalyst for change, and how do we begin? Trimble brings both political acumen and humanitarianism to his subject.