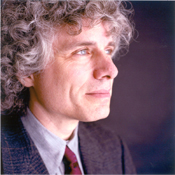 “The Stuff of Thought: Language as a Window into Human Nature”

In choosing him as one of the world's 100 Most Influential People, in 2004, TIME magazine postulated that "every half-century… an eminent Harvard psychologist crystallizes an intellectual era… [Steven Pinker] seems poised to keep its tradition alive." One of the world's leading experts on language and the mind, and a founding scholar in the field of evolutionary psychology, Steven Pinker asks audacious questions about the true nature of our humanity, and then boldly sets out to answer them. Pinker simultaneously enlightens and confounds academia and the public alike with his revolutionary understanding of the interconnectedness of language, instinct, consciousness, emotions, and neurology.

Pinker is the author of the New York Times bestseller and Pulitzer Prize finalist The Blank Slate: The Modern Denial of Human Nature. His earlier bestsellers include the Pulitzer finalist How the Mind Works; his classic, The Language Instinct; and the book popularizing his own research, Words and Rules: The Ingredients of Language. Pinker's next book, The Stuff of Thought: Language as a Window into Human Nature, is already enjoying brisk sales on Amazon.com, five months before its release in September. Pinker has written countless academic articles and frequently contributes to a variety of mainstream publications including the New York Times, Nature, Atlantic Monthly, Slate, and TIME.

Appointed Harvard University's Johnstone Family Professor of Psychology in 2003, Pinker previously served on the faculties of the Massachusetts Institute of Technology and Stanford University. He is also a fellow of several scholarly societies, including the American Academy of Arts and Sciences and the American Association for the Advancement of Science. Pinker has received numerous awards, including the Troland Research Prize from the National Academy of Sciences and five prizes from the American Psychological Association. In addition to this recognition for his research, he has won a number of teaching prizes, is included in the Esquire Register of Outstanding Men and Women, and was named among the Newsweek 100 Americans for the 21st Century.

A native of Montreal, Pinker is a graduate of McGill University and holds a doctorate in psychology from Harvard.