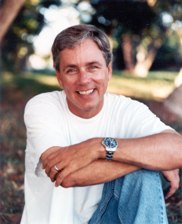 “An Evening With Carl Hiaasen”

Carl Hiaasen is a noted author, investigative reporter, and newspaper columnist. He has carved out a career as a vocal champion of the environment, foe of corruption, and scathing satirical novelist. A bestselling author, award-winning newspaper columnist, and dogged investigative reporter, Hiaasen has been called "America's finest satirical novelist" by the London Observer.

Dave Barry, Hiaasen's colleague at the Miami Herald, described him as "one of South Florida's most vital natural resources, a relentlessly sane voice in a howling hurricane of hypocrisy, hokum and hype." The New York Times compared him to Preston Sturges, Woody Allen, and S.J. Perelman. Hiaasen has been nominated three times for a Pulitzer Prize, and he received the Damon Runyon Award for his journalism and commentary from the Denver Press Club in 2003-04.

Tourist Season, published in 1986, was Hiaasen's first solo novel. GQ magazine called it "one of the 10 best destination reads of all time." Since then, Hiaasen has published a string of successful books in 33 languages, including Strip Tease, Stormy Weather, Lucky You, Sick Puppy, Basket Case, Skinny Dip, and Naked Came the Manatee, which featured different chapters written by several well-known Florida authors. Strip Tease became a major motion picture in 1996 starring Demi Moore and Burt Reynolds. Hiaasen is also the author of two novels for young readers: Flush and Hoot. Hoot was named a Newberry Honor book, and a film version was produced by Jimmy Buffett for New Line Cinema. Hiaasen has published a non-fiction book about the Disney empire and its grip on American culture, as well as two collections of his columns. His latest book, Downhill Lie, a confessional about Hiaasen's return to the fairways after a 32-year absence, will be published in May.

"In a place as wild as South Florida," Hiaasen has written, "true-life events are almost too big and too weird to be dealt with appropriately in a newspaper. The journalism feeds the imagination, which feeds the fiction."

A Florida native and graduate of the University of Florida, Hiaasen joined the Miami Herald at age 23 as a general assignment reporter and went on to work for the newspaper's weekly magazine and prize-winning investigations team. Since 1985, he has written a regular column, which appears on most Sundays in the Herald's opinion pages.