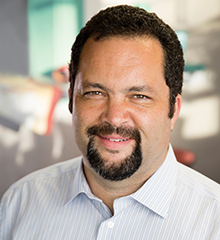 “The Secret to Unleashing Inner Greatness”

Important update, April 18, 2016: Morris Dees, co-founder and chief trial attorney of the Southern Poverty Law Center, was originally scheduled to give the 2016 Joseph S. Calvaruso Keynote, but is unable to do so due to health concerns.

Benjamin Jealous is the former president and CEO of the NAACP. He is now a partner at the Silicon Valley venture capital firm Kapor Capital, where he invests in high-growth companies that have a positive social impact and continues his goal of increasing opportunities for minorities in the tech economy.

A Rhodes Scholar, Jealous was named by Fortune and Time magazines to their “Top 40 Under 40” lists and was named a Young Global Leader by the World Economic Forum. Jealous' new book, Reach: 40 Black Men Speak on Living, Leading, and Succeeding, features personal essays from prominent figures in the black community.

The youngest president in NAACP history, he began his career at age 18 opening mail at the NAACP Legal Defense Fund. Jealous has been a leader of successful state and local movements to ban the death penalty, outlaw racial profiling, defend voting rights, secure marriage equality and end mass incarceration.

Under his leadership from 2008 to 2013, the NAACP grew to be the largest civil rights organization online and on mobile, and became the largest community-based nonpartisan voter registration operation in the country. Jealous' leadership at the NAACP included bringing environmentalist organizations into the fight to protect voting rights, and convincing well-known conservatives to join the NAACP.

Prior to leading the NAACP, he spent 15 years as a journalist and community organizer. While at Mississippi's Jackson Advocate newspaper, his investigations were credited with exposing corruption at a state penitentiary and proving the innocence of a black farmer framed for arson. While at Amnesty International, he led successful efforts to outlaw prison rape, expose the increasing trend of children being sentenced to life without the possibility of parole, and draw attention to expanded racial profiling in the wake of the September 11, 2001 terrorist attacks.