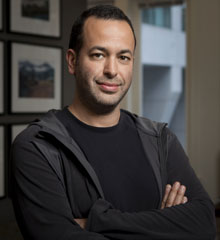 “Before It Strikes: Viral Forecasting for Pandemic Prevention”

The Indiana Jones of virus hunting, Nathan Wolfe travels the world to track, study, and eradicate the next pandemic before it strikes. One of Time's 100 Most Influential People in the World for 2011, this Viral Storm author draws on his breakthrough discoveries to tell us where viruses come from, why they spread, and how to stop them.

"Virus Hunter" Nathan Wolfe rethinks pandemic control for our globalized world. By concentrating on how epidemic diseases—such as HIV, SARS, and West Nile—all stem from human contact with infected animals, he is able to discover new threatening viruses where they first emerge. According to Wired magazine, "Wolfe's brand of globe-trotting echoes an almost Victorian scientific ethic, an expedition to catalog the unseen menagerie of the world." His debut book, The Viral Storm, is an "engrossing and fast-paced chronicle of medical exploration and discovery" (Publisher's Weekly) that takes readers from the jungles of Africa to Wolfe's state-of-the-art labs, shedding light on the often overlooked but ultimately critical field of microbiology. It was published in six languages and shortlisted for the Royal Society's Winton Prize.

Wolfe is the Lorry I. Lokey Business Wire Consulting Professor in Human Biology at Stanford University; the Founder and CEO of Metabiota, a company that specializes in microbiological research, products, and services; and the Chairman of Global Viral, a non-profit that promotes understanding, exploration, and stewardship of the microbial world. Wolfe was named a Rolling Stone "100 Agents of Change," a National Geographic Emerging Explorer, and a World Economic Forum Young Global Leader. He is also the winner of the NIH Director's Pioneer Award. Wolfe has received over $60 million in grants and contracts from Google, the National Institutes of Health, the National Science Foundation, the Bill & Melinda Gates Foundation, and the U.S. Department of Defense, among others—making him a man poised to eradicate pandemics before they even happen.

Greening of the Great Lakes