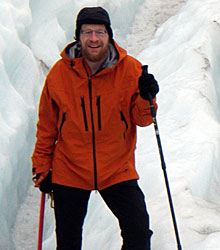 “A Brighter Light at the End of the Tunnel: The Optimistic Future of Energy and Environment”

Teacher, researcher and author Richard Alley is Evan Pugh Professor of Geosciences and associate of the Earth and Environmental Systems Institute at The Pennsylvania State University. Alley has spent 14 field seasons on great ice sheets in Antarctica, Greenland and Alaska, gathering data on climate and sea-level change. His development of future climate-change models earned him a seat on the United Nations' Intergovernmental Panel on Climate Change, which was a co-recipient of the 2007 Nobel Peace Prize.

Alley is past chair of the National Research Council's Panel on Abrupt Climate Change, and has provided climate-change information to top federal officials including a U.S. vice president and members and committees of the U.S. Senate and House of Representatives. Committed to educating the general public as well, Alley was presenter for the PBS program Earth: The Operators' Manual. He wrote a companion book for the PBS series and a popular account of climate change and ice cores, The Two-Mile Time Machine, which was named Phi Beta Kappa's Science Book of the Year in 2001.

Alley is a member of the National Academy of Sciences and has earned numerous research awards, including the Tyler Prize for Environmental Achievement, the Heinz Prize, the Revelle Medal of the American Geophysical Union and the Seligman Crystal of the International Glaciological Society. He has won four teaching awards at Penn State, and his public service has been recognized with the American Association for the Advancement of Science Public Engagement with Science Award, the Public Service Award of the Geological Society of America and the American Geological Institute Award for Outstanding Contribution to Public Understanding of the Geosciences.