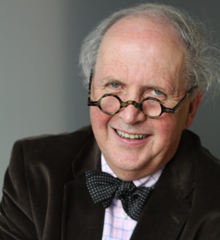 “The Very Small Things of Life”

Alexander McCall Smith has written and contributed to more than 100 books ranging from specialist academic titles to children’s literature. He is best known for his No. 1 Ladies’ Detective Agency series, which to date has been translated into 45 languages and sold over 20 million copies worldwide. The series, which was adapted for BBC Radio and HBO television, has inspired a cookbook and led McCall Smith to share the young Precious Ramotswe’s story in a series of children’s books.

While he has written many popular stand-alone novels and short stories, McCall Smith is a master of series fiction, including The Sunday Philosophy Club, Portuguese Irregular Verbs, and three children’s series. Fascinated with the challenge of writing to deadline, McCall Smith began two other series with novels written in installments. 44 Scotland Street was a cultural obsession when published in weekday installments in the Scotsman newspaper. Corduroy Mansions was likewise originally published and podcasted serially by the United Kingdom’s Daily Telegraph. McCall Smith is currently working on a book about W. H. Auden, scheduled for publication by Princeton University Press in 2014.

McCall Smith was born in what is now Zimbabwe and was educated there and in Scotland. He first returned to Africa to help establish a new law school at the University of Botswana. Now a professor emeritus of medical law at the University of Edinburgh, he also served as vice chairman of the Human Genetics Commission of the United Kingdom, chairman of the British Medical Journal Ethics Committee, and as a member of the International Bioethics Commission of UNESCO.

McCall Smith is the recipient of numerous awards, including the Crime Writers’ Association’s Dagger in the Library Award, the United Kingdom’s Author of the Year Award (2004), the Saga Award for Wit, and Sweden’s Martin Beck Award. In 2007 he was made a Commander of the British Empire for his services to literature. He holds honorary doctorates from 12 universities, and the Presidential Order of Merit given by the president of Botswana. He lives in Edinburgh.