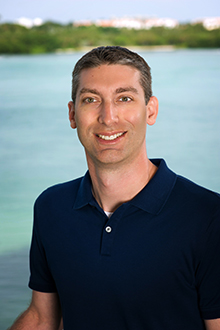 “How to Be a Shark Scientist (or Anything Else)”

Nick Whitney is a senior scientist with the Anderson Cabot Center for Ocean Life at New England Aquarium and is currently in residence at Newport Aquarium in Newport, Kentucky.

Born in Jackson, Michigan, he grew up knowing one thing about sharks: they eat you. By the time he finished high school—and after reading a lot about sharks—Whitney was a bona fide shark nut and aspiring marine biologist. At Albion College, he learned the basics of field research, studying nurse sharks in the Florida Keys with Dr. Jeffrey Carrier. After graduating from Albion, Whitney pursued his master’s and doctoral degrees at the University of Hawaii at Manoa, where he learned that sharks actually can be dangerous if you grab their tails and refuse to let go, or if you swim directly into their open mouths.

Whitney has spent the past several years developing the use of accelerometers that can sense sharks’ fine-scale movements, measuring with great precision how they swim, tilt, roll, and dive. In the process, these tags are starting to shed light on a long-in-the-dark shark mystery: Although scientists have known where the animals go, they generally have had no idea what the sharks are actually doing when they go there. Whitney is using technology found in a wearable fitness tracker or smartphone to answer the “What are they doing?” question, and it turns out they are doing some surprising things.

The first to deploy accelerometers on wild sharks, Whitney has since used the tags on white sharks, sea turtles, Burmese pythons, and several other species. He has published numerous scientific papers, magazine articles, and encyclopedia articles, and has appeared on television on the History Channel, the Discovery Channel, and the National Geographic Channel.

Whitney received the “Top 10 in 10” Young Alumni Award from Albion College in 2010. He lives in Cincinnati, Ohio, with his wife of 16 years, Holli (Mezeske), ’99, and their three children.