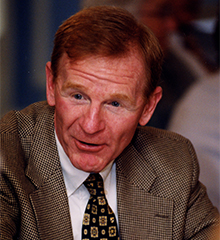 “From Fat to Fit: Reflections on Exercise, Nutrition, and Weight Control”

Kinesiologist James E. Misner, '66, has been an educator and researcher in the areas of physical fitness and exercise for nearly 30 years. He is currently professor of kinesiology at the University of Illinois in Champaign. In addition to directing numerous research projects for the University of Illinois, Misner, has conducted research for the American Heart Association, the Illinois Association for Health, Physical Education and Recreaction, and the Champaign-Urbana Mass Transit District. Misner has worked as a consultant for some two dozen different government and business organizations, including the Illinois Association of Boards of Police and Fire Commissioners, the Civil Service Commissions of Champaign, Illinois and New York City, the civil service system for Illinois universities, and the University of Illinois Medical School. Misner has also served as an expert witness in four court cases.

Currently, Misner serves as a consulting editor of the Journal of the National Intramural-Recreational Sports Association and as editor of the Illinois Journal of Health, Physical Education, and Recreation. He has contributed more than 50 articles to these and many other professional journals in the U.S., Europe, and Australia. Misner has also contributed to dozens of research abstracts, reports, and manuals, co-authored a book and instructional software, and has given nearly 75 presentations to professional conferences. Since 1978, he has been recognized 14 times on the Chancellor's List of teachers ranked as excellent by their students.

Misner joined the faculty at the University of Illinois shortly after receiving his doctorate there in 1971. Misner holds a master's degree from the University of Arizona in Tucson. He is married to Marilyn Spitler Misner, '68, and they have two daughters, Kristin Misner, '96, and Anne.