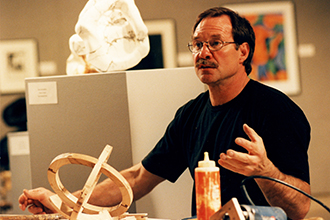 Terrence Karpowicz is a professional sculptor who lives and works in Chicago, IL. He has received two National Endowment for the Arts fellowships and five grants from the Illinois Arts Council in support of his work. He also received a Fulbright Hayes Grant to the United Kingdom. Karpowicz's work is now held in collections in the Tblisi Museum in the Republic of Georgia, the Steensland Museum of Art and Tweed Museum, both in Minnesota, and the Rockford Art Museum in Illinois, as well as at the University of Oklahoma at Norman, Governor's State Park, Park Forest, IL, and Tiffany's & Co. His works have been commissioned by Northeastern University in Chicago, Crain's Chicago Business, the University of Illinois Medical Center in Chicago, the City of Chicago’s Thurgood Marshall Memorial Library and the Illinois State University Life Science Building in Normal, IL. For the past three years, he has been executive director of the 3D Chicago/Pier Walk Exhibition at Navy Pier and has also participated as an exhibitor.

His solo exhibitions have been displayed at the Franz Bader Gallery in Washington, DC, the Zolla/Lieberman Gallery in Chicago and at other locations in the Midwest, and he has been a featured artist in group exhibitions at McCormick Gallery, DePaul University, the Ukrainian Art Museum, and the Evanston Art Center, all in the Greater Chicago area, as well as at the University of Notre Dame, Carnegie Mellon University and Albion College.

A 1970 graduate of Albion College, Karpowicz also participated in the New York Arts Program while at Albion. The recipient of an M.F.A. degree from the University of Illinois at Champaign-Urbana, he has served as a visiting artist at nine colleges and universities. Recently he has been commissioned to create two sculptures for Albion College, and the first, now installed near the entrance to the Dow Recreation and Wellness Center, was dedicated today (April 3, 1998).