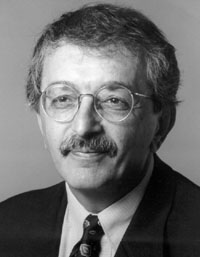 A teacher and researcher of distinction, John Vournakis has published more than 150 research articles in the fields of biophysics, molecular biology, and biotechnology, and is an inventor on over 15 U.S. and foreign patents. After graduating from Albion, he continued his education at Cornell University, earning his M.S. and Ph.D. in biophysical chemistry in 1966 and 1968, respectively.

From 1970 to the present, Vournakis has held faculty appointments at several of the nation's most prestigious colleges and universities. After a year on the Amherst College faculty, he served at Syracuse University from 1973 to 1985 as assistant, associate, and full professor of biochemistry. From 1985 to 1988, he was professor of biology and director of the Molecular Genetics Center at Dartmouth College in Hanover, N.H. He left academia to become a senior executive in the biotechnology industry from 1988 to 1992 and returned to teach again at Dartmouth from 1992 to 1995. In 1995 he became a professor of medicine and associate director for the Hollings Cancer Center, Medical University of South Carolina (MUSC).

In 1992 Vournakis co-founded Marine Polymer Technologies, Inc., a start-up medical products company. He is the inventor of a polymer-based technology that has led to several FDA-approved products, including the SyvekPatch hemostat used for the rapid control of bleeding following medical procedures such as cardiac catheterization.

Vournakis was a predoctoral and postdoctoral Fellow of the National Institutes of Health, a National Academy of Sciences USA Fellow (1968), a European Molecular Biology Organization Fellow (1970), and received a National Science Foundation Senior Research Associate Award (1972-75). He currently holds six editorial positions, including editor of the Genetic Engineering News, and serves on the Hollings Cancer Center Board and the MUSC Foundation for Research Development. He is a member of the Tsintzina Society board and of the Greek Orthodox Church.

Vournakis received a Distinguished Alumni Award in 1996. He lives in Charleston, S.C., with his wife, Karen Munro Vournakis, '66. They have one son, Christopher.