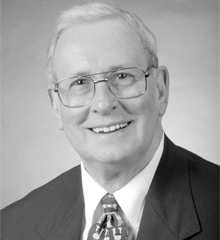 “From Crawler to Walker to a Polio-Free World”

A Detroit native, Joseph Serra served in Korea from 1950 to 1951 as a Navy medical corpsman with the First Marine Division Air Wing. After graduating from Albion in 1956, he then earned his M.D. degree from Wayne State University Medical School. He interned at Los Angeles County Hospital and returned to Wayne State University for his residency in orthopedic surgery. In 1966, he and his wife, Dorothy McEvoy Serra, '59, moved to Stockton, Calif., where Joe entered private practice. He co-founded the Stockton Orthopedic Medical Group in 1970. His special interest has been sports medicine. He has served as orthopedic team physician for the University of the Pacific, the Milwaukee Brewer farm system, and the Stockton Ports baseball team.

Serra has served the Rotary Foundation as a volunteer orthopedic surgeon in Malawi, Africa, on four tours of duty, primarily performing surgery on polio victims called "crawlers." He received the Rotary Foundation Citation for Meritorious Service, the President's Citation, the Service Above Self Award, and the Foundation PolioPlus Pioneer Award. He and his wife represented Rotary International in Liberia, Africa, during the first National Immunization Days in January 1999.

In his home community, Serra has served on several boards, including Goodwill Industries and the University of the Pacific Athletic Foundation, and is a member of many medical societies and international organizations. He was named "Stocktonian of the Year" in 1987, which he attributes to Rotary's prominent identity in his community.

The Serras have two sons and two grandchildren. Joe's favorite activities include skiing, mountaineering, travel, photography, and giving slide presentations about Rotary's legacy to the world-the eradication of polio.