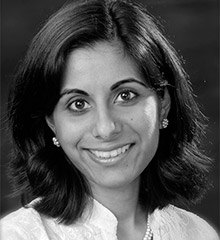 “Paradigm Shifts in Health and Science”

As a child, Samata Singhi listened to her grandfather's stories about taking medical care to remote villages in their native India. Accompanying her physician parents to their immunization drives in city slums, she saw children suffering from malnutrition and dehydration. These experiences eventually inspired her to pursue a career in medicine and public health. Today her interests stretch across the whole spectrum of healthcare—from grassroots access to bedside practice to governmental policymaking.

While an Albion student, Singhi was elected to the cabinet of Student Senate, and helped found the International Student Union. Through her medical externships and volunteer work in India and the United States, she developed a greater understanding of the disparities of access and outcomes in healthcare, and presented these in her honors thesis at Albion. For her work, she received the Maurice L. Branch Award for outstanding research and scholarship in economics. She was also elected to Phi Beta Kappa.

Singhi is currently chief resident for the Child Neurology Program at Boston Children's Hospital/Harvard Medical School. On completing her residency in 2016, she plans to pursue a career in academic medicine and continue to advocate for projects that promote effective and efficient medical care for all members of society.