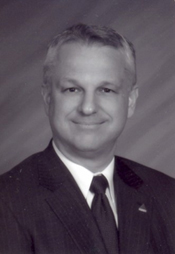 “Albion College - the Training Camp for the Nine Innings of Life”

Joseph Calvaruso currently serves as senior vice president and director of risk management for Mercantile Bank in Grand Rapids. He is also secretary and treasurer for the Board of Directors of Michigan Certified Development Corporation, which provides funding for business start-ups and expansions. As a member of the Michigan chapter of the Risk Management Association, he has held numerous leadership positions, including the presidency, and won many achievement awards. He has also served on the association's international Board of Directors and on numerous national committees.

Prior to joining Mercantile Bank, Calvaruso spent nearly 20 years as executive vice president of Chemical Bank Shoreline in Benton Harbor. He left that job in June 2004 to join Vice President Dick Cheney's reelection campaign as a member of the national advance team. Over the past six years, Calvaruso has also served as a coordinator for visits to Michigan and throughout the country by members of the Bush administration. Earlier in his career, Calvaruso held positions with City Bank in Jackson and Comerica Bank in Kalamazoo.

Calvaruso sits on the Gerald R. Ford Institute for Public Policy and Service Visiting Committee at Albion College and is a former member of the Michigan Work Force Investment Board. He is a past chairman of the Kalamazoo County Republican Party and is a current member of the Republican State Committee.

Earlier this year, Calvaruso and his wife, Donna, endowed the Joseph S. Calvaruso Keynote Address for this symposium. In keeping with Calvaruso's personal goal to "try different things in life," the keynote endowment ensures the symposium will continue to provide an exceptional variety of presenters from the arts, sciences, social sciences, and humanities. An Albion native and a product of the Albion Public Schools, Calvaruso graduated from Albion College in 1978 and holds an M.B.A. from Western Michigan University.