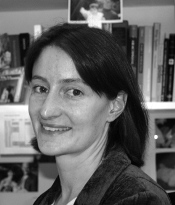 “Exploring life on eight legs: The journey from Albion to Arachnophilia”

Eileen Hebets is currently assistant professor in the School of Biological Sciences at the University of Nebraska-Lincoln, where she teaches zoology and behavioral ecology. From 2003 to 2005, she held appointments at the University of California, Berkeley as assistant professor in the Department of Environmental Science Policy and Management/Division of Insect Biology, curator of the Essig Museum, and member of the Helen Wills Neuroscience Institute. She held a National Institutes of Health post-doctoral research fellowship in the Department of Neurobiology and Behavior at Cornell University in 2002-03.

A specialist in the evolution of animal communication systems, Hebets is currently focusing her research on the development of complex signaling systems in various spider species. Supported by a Searle Scholars Program Fellowship and a National Science Foundation CAREER grant, her work includes both field-based experiments and observations and an array of laboratory techniques and methods drawn from molecular biology and neurophysiology. Hebets' field research has taken her to caves in Puerto Rico, rain forests in Costa Rica, and the sky islands in Arizona.

Her findings have been covered by national and international news organizations including The New York Times, USA Today, The Boston Globe, BBC Online, CNN, ABC News, and National Public Radio. She also served as a consultant for the movie Spiderman (2002). Hebets' scholarly publications include articles in the Proceedings of the National Academy of Science, Journal of Experimental Biology, Animal Behaviour, Behavioral Ecology, and the Journal of Insect Physiology, among others.

This year's lecture marks the first time in the history of the Isaac Symposium that our Alumni Lecturer also participated in the symposium as an undergraduate. In 1994, Hebets gave a presentation entitled, "Habitat and Courtship Behavior of the Wolf Spider Schizocosa retrorsa." Named the outstanding senior biology major that year, she also received the Edmund and Kathleen Jenkins Research Award from Albion.