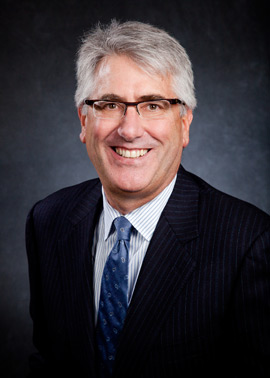 In his role at the University of Illinois, Schook oversees an $800 million annual sponsored research portfolio covering the University’s three campuses. Additionally, he monitors the University’s research-related concerns including intellectual property, technology commercialization, and economic development.

Schook is also an active researcher, exploring comparative genomics and translational biomedical models. He is an Edward William and Jane Marr Gutgsell professor in biomedical sciences and holds faculty affiliations with the Institute for Genomic Biology, the Beckman Institute for Advanced Science and Technology, and the Micro and Nanotechnology Laboratory. He currently directs the international Swine Genome Sequencing Consortium and was principal investigator for a $25 million research project sponsored by the NIH, NSF and USDA.

Schook has launched two start-up companies focusing on molecular medicine and is a fellow at the Kaufman Academy for Entrepreneurial Leadership. He has served in key leadership roles at the National Research Council in animal genomics, chaired the executive steering committee of the Alliance for Animal Genome Research and was coauthor of both the cattle and pig NIH genome project white papers.

He has served on the boards of multiple biotechnology companies and the Biotechnology Industry Organization and was appointed by Illinois governor Pat Quinn to the Illinois Innovation Counsel. He is currently on the board of governors for the Argonne and Fermi National Laboratories.

Schook began his research career working with Albion College biology professor Ken Ballou, and went on to earn a doctorate from Wayne State School of Medicine, followed by postdoctoral training at the Institute for Clinical Immunology in Switzerland, and the University of Michigan. He has also held faculty positions at the Medical College of Virginia and the University of Minnesota, and was a visiting professor at the Ludwig Cancer Center of the University of Lausanne.

He is a recipient of NIH, Swiss National Fund and Pardee fellowships, received the Funk Award for Meritorious Achievements in Agriculture and the Pfizer Animal Health Research award, and is an elected fellow of the American Association for the Advancement of Science. In 2010, Schook was a Fulbright Distinguished Chair in human genomics at the University of Salzburg. He was recently selected as the ninth University of Illinois at Urbana-Champaign Chancellor’s Center for Advanced Study Lecturer for his pioneering work on genomics and evolutionary biology. He has mentored 38 undergraduate students, 37 graduate and doctoral students, and 19 postdoctoral fellows; has written more than 200 published works; edited six books; and is founding editor of Animal Biotechnology. Schook was named an Albion College Distinguished Alumnus in 1996.

About the Elkin R. Isaac Endowment.