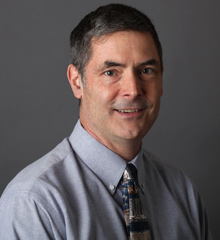 “Michigan’s Clean Energy Success and Why Not Everyone Is Thrilled”

As communications director with the Michigan Environmental Council (MEC), Hugh McDiarmid, Jr., '84, works with more than 60 environmental, public health, and faith-based groups across the state dedicated to positive change through the political process. Based in Lansing, MEC works on issues such as clean energy, forest management, children's health, environmental justice, transportation, climate change, and air pollution. Surrounded by the world's largest freshwater ecosystem, MEC is also heavily involved with issues affecting the health and preservation of the Great Lakes.

An English major at Albion, McDiarmid worked as a reporter and editor at the Roscommon Herald-News and the Grand Rapids-based Advance Newspapers before joining the Detroit Free Press in 1996. At the Free Press, McDiarmid won numerous state and national awards within news beats as varied as crime, politics, local government, and breaking news. He became the Free Press' environmental writer in 2003 where he broke news on issues including Great Lakes water pollution, lead poisoning in Michigan children, dioxin contamination downstream from Dow Chemical Co. in Midland, and efforts to protect public access to the Upper Peninsula's hardwood forests.

McDiarmid is a member of the East Michigan Environmental Action Council. He was a member of Albion's Delta Sigma Phi fraternity and active with Albion's club lacrosse team. McDiarmid lives in Farmington, where he keeps bees and plays goalie on a master's lacrosse team.