The third annual Albion College Film Festival will be held Sunday, February 17, and student organizers are convinced it will be the biggest, best and most expansive one yet. 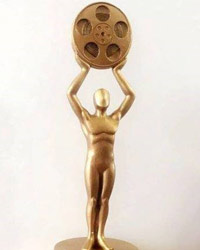 The winning entry in the Albion Film Festival receives this trophy. The festival, now in its third year, will be held Sunday, February 17, at the Bohm Theatre starting at noon.“We’ve learned from previous mistakes,” said Lucas Lusk, ’19, who, along with Taylor Karns, ’20, and Grant Smith, ’20, (and members of the Prentiss M. Brown Honors Program), has been a part of the festival since its inception. “We’re really picking up the pace.”

The festival starts at noon at the Bohm Theatre in downtown Albion, and organizers say some 20 short films (no longer than 10 minutes) are set to be shown.

"We're pretty happy with the number and quality of films this year,” Lusk said.

But unlike the previous two festivals when most of the films were produced by Albion students, this year's event has been specifically opened up to filmmakers around the region.

“We started expanding where we’ve been advertising the festival,” Smith said. “We’ve reached out to more schools in Michigan, Illinois and Indiana, and it’s been a pretty good response.”

“Last year it was more word of mouth,” Karns said, adding that submissions have been received from Wayne State University, Oakland University and Mott Community College in Flint.

"We even have a submission from Purdue [University] this year,” she said.

The festival is free and open to all, though donations benefiting the arts department at Albion’s Harrington Elementary School are welcomed. In the first year donations totaled $50 and last year they amounted to $137.