After last year’s debut, three Honors Program students remain the creative force behind the February 13 follow-up at the Bohm Theatre 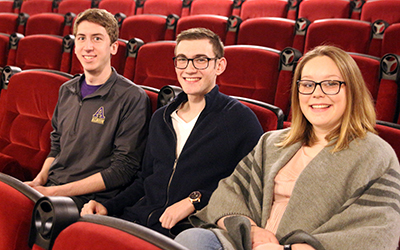 Lucas Lusk, Grant Smith and Taylor Karns (left to right) helped create the Albion Film Festival last spring as part of their Prentiss M. Brown Honors Program experience. They enjoyed it so much, the sophomores are back with the second annual event February 13 at the Bohm Theatre.It was supposed to be a way to fulfill an end-of-semester assignment. But for three Albion College friends who were looking to do something different, it has become something a little bit more than that.

“We had to do a project to advocate for the arts,” said Smith, a finance major from Plymouth. “Lucas and Taylor and I got together to maybe create a film or do something in film. We came up with the idea of students from Albion and the community to submit films and give them an opportunity to have them up on the big screen at the Bohm Theatre.”

And the Albion Film Festival was born.

Lusk, a psychology and communication studies major with a management minor from Naperville, Ill., said the idea came when he remembered the festival his older brother Cory helped create while at the Illinois Media School.

“That inspired me,” he said. “We didn’t want this to be a missed opportunity.”

Last year’s event, put together at the last minute and with little publicity, drew nine submissions. But what it lacked in quantity, it more than made up for in originality, said Renée Kreger, assistant director of the Honors Program who has helped coordinate the project.

“There was one that had four boys in a gazebo that was a traveling time machine,” she said. “The band put together another one when the room exploded and they had a battle with their instruments.”

The films, none longer than 10 minutes, were screened at the Bohm for students and the community at no charge, though donations were accepted. In the end, $50 was collected, which was then donated to the Harrington Elementary School arts program.

Lusk, Smith and Karns served as judges, and the top three films were presented with plastic replicas of the Academy Awards' Oscar statuette.

“At the end of the project we felt really good about it,” Smith said.

“The kids said they had so much fun and we asked if they wanted to do it again,” Kreger said.

And so they are.

The second annual film festival is set for Tuesday, February 13, again at the Bohm. It starts at 7 p.m. and entries are being accepted through Monday, January 29.

“Nothing longer than 10 minutes,” Kreger said.  “And it can be on anything….. that’s appropriate.”

So far, seven films have been submitted but more are expected. Lusk, Karns and Smith will again serve as judges. They will view the films ahead of time and announce the winners after the public screening. Once again, the event is free to the public and all donations will go to Harrington Elementary's art program. And Kreger offered special thanks to Nancy Doyal, director of the Bohm Theatre, who made the historic downtown venue available.

Karns, a biology and biochemistry double major from Marshall, said they have received films from both Albion students and the community and they have come in various forms—from phones to cameras.

“There have been so many different types,” she said.

And with more time (they began working on publicity in October) to get the word out, the trio is hoping for more films from the community and even from younger students.

One entry this year is from 11-year-old Jack Wylie, whose mother, Laura, works in the political science office.

His topic? A remake of King Kong using a stuffed monkey and a Barbie doll.

From a fledgling start, there are now hopes the festival can grow and develop and become part of an Albion tradition. There are thoughts of recruiting films from other colleges and making the festival a regional event.

“There is enough interest,” Smith said.

“It’s a great way to gain interest in the college,” Karns added.

And, just maybe, the next great American filmmaker will get their start in the unlikeliest of places.

“We’re definitely very proud of it,” Smith said. “We’re hoping in the next couple of years to get more underclassmen to join in and keep it going after we leave. And we’re excited about getting younger kids’ submissions and see what’s rolling around in their minds.”

Interested in submitting a film? The deadline is Monday, January 29 and submissions should be sent as an .mp4 file to . Along with the file, include your name, contact information and a short description of your film. For more information about the February 13 festival, contact Renée Kreger at 517/629-0614.