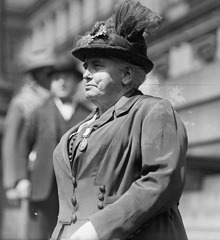 Anna Howard Shaw (right), a leader in the woman's suffrage movement and an Albion College student from 1873-1876, was born on this day in 1847. (Liz Lemon, Tina Fey's character from the NBC show 30 Rock, prefers to declare February 14 as Anna Howard Shaw Day, rather than Valentine's Day.) Trisha Franzen, professor of women's and gender studies, recounts a painful yet fortuitous event for Shaw on her birthday in 1914.

One hundred years ago ...

How an accident led to Anna Howard Shaw’s autobiography

It wasn’t a very happy birthday for the 67-year-old president of the National American Woman Suffrage Association.

There had been a major snowstorm in the New York City area on February 13 (just like this year). Anna Howard Shaw and fellow suffrage leader Carrie Chapman Catt were trying to get back to the city from Ithaca in time for the gala planned to honor Shaw and celebrate Susan B. Anthony’s birthday, February 15.

When Shaw and Catt finally got to Jersey City, the steps from the train were icy and Shaw slipped. No, she didn’t want an ambulance, didn’t want to go to the hospital—Shaw always resisted going to the hospital. And she was a doctor herself. So Catt found a taxi that got Shaw to her hotel. Examined by the hotel doctor and her own physician (a woman, of course), Shaw had to accept that this wasn’t just a twisted ankle. It was broken. She would not only miss her birthday celebration, but she would have to cancel her suffrage campaign trip through the South.

There was an upside to this, eventually, for Shaw and for us. Journalist Elizabeth Jordan had been hounding Shaw to write her life story, but on some level she knew Shaw would never voluntarily slow down enough to put pen to paper. Jordan saw her chance now. For the next six weeks, Jordan and a stenographer showed up at Shaw’s hotel room every morning. Shaw would tell the stories of her life. From the notes the stenographer took, Jordan and Shaw would fashion her autobiography, The Story of a Pioneer.

Franzen's new book, Anna Howard Shaw: The Work of Woman Suffrage, will be available in March through University of Illinois Press. Look for more about the book soon on albion.edu.