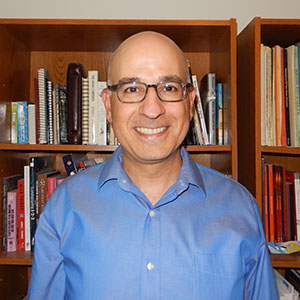 “I am proud to have spent my career at Albion and believe in the education we provide,” said Dr. Mourad, who began teaching at Albion in 2001. “An Albion College education helps students become reflective thinkers, engaged citizens and creative problem solvers. This work has never been more important in addressing the world’s most pressing social, ethical and political challenges.”

“I am excited to partner with Dr. Mourad on the ongoing evolution of Albion College,” Dr. Johnson said. “I know he is a trusted and valued leader among the faculty and has been a voice for innovation while championing the central idea of the liberal arts.

“Dr. Mourad is an accomplished scholar of religious studies, a successful podcasting public intellectual and a deeply good soul," Dr. Johnson continued. “I welcome his guidance, his careful and rigorous thought, and his ability to lead the faculty through this challenging, but hopeful, time in the life of the College.”

Dr. Mourad will begin his provost duties on July 1 in the midst of the ongoing COVID-19 pandemic that altered the end of the spring semester and will reshape not only the upcoming academic year but, likely, years to come.

“There’s kind of an emergency management aspect to this,” he said. “There’s a day-to-day aspect to the job with things like tenure decisions and faculty development. But Dr. Johnson has laid out quite an ambitious agenda of curricular change, and that will get ramped up, and that’s a challenge that I’m excited about. I like thinking about new programs and how they attract new and different types of students. The curriculum has to respond to the way our culture and economy have changed, but still have a liberal arts goal of being intellectually enriching. We want to make our students better workers and better thinkers.”

A second-generation Arab-American, Dr. Mourad is a native of Wisconsin but moved with his family frequently and was immersed in many different cultures.

He believes his background is ideally suited to help shape the growing diverse and inclusive student population on campus.

“That becomes something we think about very intentionally,” he said. “Growing up with this exposure to different cultures definitely influenced me intellectually, and my commitment to a culturally, racially and religiously diverse Albion is definitely rooted in this experience. We want to enliven a student’s imagination.”

Dr. Mourad admits he likely won’t have time to teach the religious studies classes he loves so much. As he settles into his new role, he plans to count as a valuable resource Dr. Marc Roy, who served as provost the last five years and who, following a 2020-21 sabbatical, will return to Albion to teach as a member of the Biology Department.

“I have a lot to learn and he’s an old hand at this,” Dr. Mourad said. “I plan to take advantage of his expertise and experience. This should be an interesting challenge.”