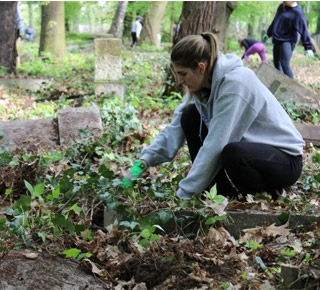 Madison Vaive, ’18, helps clean up and restore a grave in the New Jewish Cemetery in Wroclaw, Poland, during the 2017 Holocaust Studies trip. Another group of Albion students is headed there to continue the work.

The group leaves Sunday, May 5, for Wrocaw, Poland, where students will work to uncover and restore graves of Holocaust victims and others buried at the 40-acre Lotnicza Street Jewish Cemetery there.

McWhirter, along with other faculty and staff, accompanies and works with the students on the project, and she distinctly remembers her first trip there in 2007. At the time, “you could stand in the middle of the cemetery and not see the fences,” she says, because it was so overgrown.

But, because of the work of Britons and others, that view has substantially changed.

“Now you can stand in the middle and see the fences,” she says. “And it doesn’t take two weeks to find a grave.”

“Students have this definite sense that they are uncovering someone who hasn’t been seen in decades,” McWhirter adds, “and maybe their family will now come and visit them. We brought this person back to them.”

Wroclaw used to be the city of Breslau, Germany, but it was taken over by the Soviets in 1945 when the borders were redrawn after the war. McWhirter describes the work the students do in the cemetery as “an historical recovery and act of remembrance, to honor the people who have passed and what happened to their families.”

The group’s work includes uncovering gravestones and removing fallen branches, weeds and layers of leaf mold. They do not stand the graves back up and cement them, McWhirter explains, “but we have bought the caretakers a tripod so they can do that.”

There are some free-standing gravestones that survived at the cemetery, although most of them were knocked down at one time or another, according to McWhirter.

She adds that the cemetery is still active.

“The Jewish community of Wroclaw continues to bury their dead there,” she says.

The project is an experience that attracts just about everyone. Students who have previously gone on the trip and those who are going this year come from “science, fine arts, social sciences and humanities,” according to McWhirter. “They are from all divisions.”

She also mentions that there have been some who have gone on the trip and later go on to obtain graduate degrees in Holocaust studies or related topics.

The cemetery work is followed by a three-day exploration of Kraków, and a day trip to the Auschwitz-Birkenau concentration and extermination camp. For the upcoming trip, several optional days were added to go to Warsaw and visit the new Museum of the History of Polish Jews.

“Very few [students] have been to the camps before,” McWhirter says. “Most have never been to Europe.”

It’s this experience that initially drew Cameron Voss, ’20, to Albion College, and her experience there is one she will never forget. Voss was one of 21 students on the ninth trip, in 2017.

“It was a jungle—just massive,” Voss remembers of the cemetery. “Everything was overgrown. We’re changing it to a garden paradise—that’s what it was before.”

For Voss, the experience “is life-changing. No matter what your major is, it’s an equalizer.”