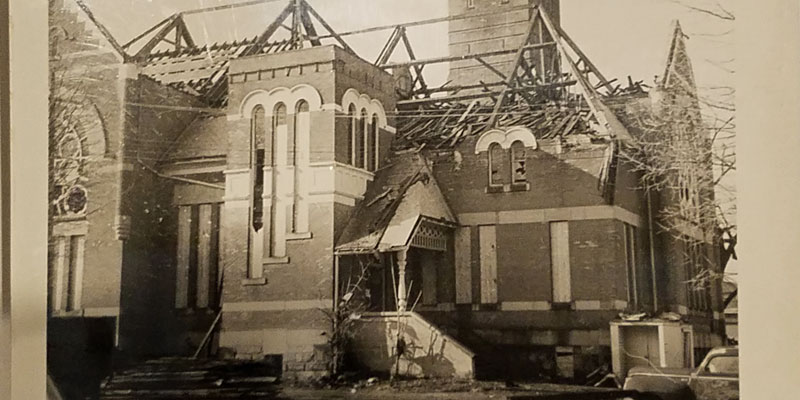 The former Albion United Methodist Church building on Erie Street was demolished after the church moved to its current East Michigan Avenue location in 1957. This photo helped spur the conversation with one of Tyler Eyster's interview subjects in his oral-history FURSCA project.

Earlier this summer, while chatting with a group of Albion churchgoers, I made a remark about religious diversity and immediately regretted it. I worried that these older people might be offended by the idea that one could embrace people of different faiths. Later, a woman in the group told me, ‘If you think we think we’re the only ones going to heaven, you’re wrong. These people are my family and I love them, but if I had to stay with just them for all eternity, I’d probably walk right out those Pearly Gates.’

One of many things I’ve learned while gathering oral histories of Albion churches: people don’t always match the doctrine of their church and I’m pretty sure their beliefs can change over time. It’s easy to assume that people who have been part of one church for a long time aren’t very open to different beliefs and ways of thinking, but when you start to listen, you hear a lot of interesting and surprising things.

My project, sponsored by Albion College’s Foundation for Undergraduate Research, Scholarship and Creative Activity, involved members and leaders of five churches in Albion in a series of 15 interviews. The churches are First United Methodist, St. John’s the Evangelist, Holy Ascension Orthodox, First Baptist and Lewis Chapel AME. My goal was to gather oral histories mainly looking at how these churches and their members maintained and pursued involvement within the community. In other words, I was focusing on civic engagement as it relates to Albion’s religious life.

I learned very quickly that “cutting to the chase” was not the best way to get answers. People will tell you anything, but you have to start with what’s important to them. For instance, I discovered that when I talk to men of a certain age, sooner than later they want to talk about military service. At first, this seemed irrelevant, but then I realized that giving people the chance to open up and letting them lead the interview was probably the best way to collect information. I had to learn that just because it might not seem relevant to me or to the scope of my project, to the person I’m interviewing those stories and bits of their own history have affected their lives in ways that are meaningful to this day.

Photos also help in getting people to talk; but again, sometimes it was better to be indirect. I had one particularly difficult session with a man who agreed to the interview but then would only give me very short answers. I started to think the interview was a loss and then we looked at some pictures. He had no comment on an old picture of his own church, but seeing the old United Methodist church (above) brought back a memory, and the interview really started from there. As soon as he saw the before and after pictures of that church being torn down, he really started to open up about growing up in Albion and what that part of his life meant to him.

Tyler Eyster, '20I did video recordings of all my interviews and am working now to edit a presentation for the community. Written histories and archives are valuable, but most of the information I gathered is only available through oral history. Oftentimes the people I interview had no interest in recording their stories, or only felt that what they had to say was interesting for members of their own family. Those qualitative experiences—people, places, memories and events that have shaped people’s lives—they just don’t show up in the published record. I think those particulars from individual people’s lives can tell us a lot about both Albion and its churches. So I’m hoping to find a way to preserve stories which matter to this town and the people living here.

I’m from a city where people eat, shop, sleep and then go live their lives somewhere else. It has everything a person could want but not what they need. Albion is the exact opposite, which is why I’ve fallen in love with this community over the past couple of years. People are involved with the town and genuinely care for one another. Some of the kindest people I’ve ever met are living right here in Albion.

Tyler Eyster is a junior majoring in religious studies and English with a minor in history, and is a member of the Prentiss M. Brown Honors Program. He is the child of Kevin and Vivian Eyster of Canton and a graduate of Rudolf Steiner School of Ann Arbor.