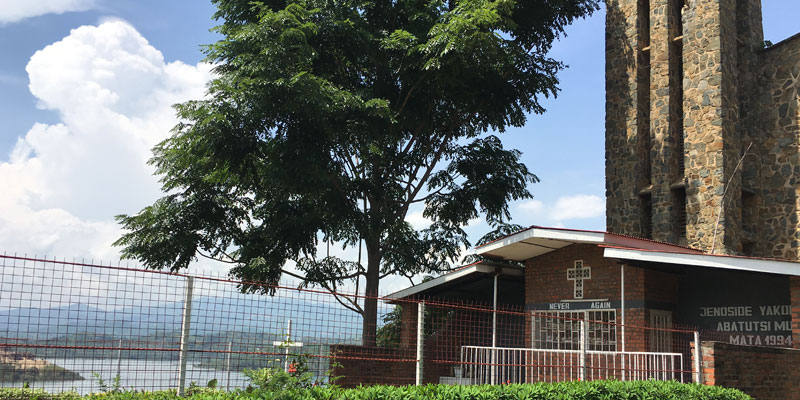 The genocide memorial at St. Pierre Church in Kibuye, Rwanda, is a reminder of what happened to the Tutsi in this African nation in 1994.

The best place to study post-genocide restoration and peace building is to do it where people are still in the process and have come through many difficulties. In spring 2018 I studied abroad in Rwanda. The experiential learning process was emphasized through constant site visits and learning from people with firsthand experience. Below are only a few of the incredible things Rwanda had to offer me. 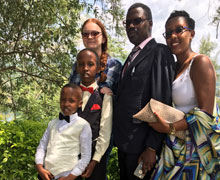 Cameron Voss, '20 (top row, left), with her host family attending Easter mass at St. Pierre Church in Kibuye. Voss, an anthropology and religious studies major, is the daughter of Daniel and Amy Voss of Sault Ste. Marie, Mich., and a graduate of Sault Area High School. There were bright colors and welcoming people, brilliant music, and dancing. My host parents were friends of the groom, so we sat on the groom’s side of the yard. The entire ceremony had the common theme of giving. The bride was given to the groom’s family. In return the groom’s family gives multiple gifts to ‘convince’ the bride’s family to pass her over. The crowd was almost all made up of younger people with only an occasional man or woman over 40. This lack of elders, caused mainly by the 1994 genocide against the Tutsi, is still felt in everyday events, even the happy ones.

There were so many moving and interesting events in the ceremony, but the one that had the most impact was the final gift that was given. The bride and groom offered gifts for important familial figures: parents, aunts, uncles, and so on.

The bride had kept her composure even when giving a gift to her mother, but when an elderly woman made her way to the center of the gathering, the bride embraced her and wept on her shoulder. I assumed that there was a familial relation, but I did find it curious that of all the points in the ceremony it was this woman that set her off crying.

As the bride cried my host mother leaned over and whispered in my ear that during the genocide this woman saved the bride’s life by hiding her. There were very few dry eyes in the crowd of over 300 people.

On Easter Sunday, we traveled several hours to Kibuye, to celebrate a child’s baptism. Right in front of the church was a small building whose windows are filled with the skulls of people killed around the church during the genocide. I had seen such things before, but it is always a shock. 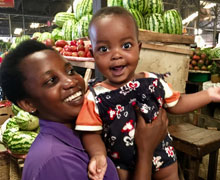 Vendor and child at the Kimironko Market.For our Kinyarwanda language class, we met at the Kimironko market to practice our bargaining skills. We were split into groups and were given 2,000 Rwandan francs (about $2.25), with the goal of not paying exorbitant prices. It was expected that the vendors would call us in English, but we were expected to try our best to practice our language skills. Many of the vendors found our use of Kinyarwanda surprising and were amused with our efforts enough to give lower prices with little hassle.

The market was amazingly colorful and busy. Anything you could think of, it was sold there: produce, cloth, shoe repair, cell phones, and much more. My group mainly stayed in the fruit section and ended up with one giant mango, four lemons, 11 passion fruit, one orange, one tomato, and one pineapple with our 2000f. The mango was particularly fun, because our instructors were blown away that we were charged only 400f when they would have paid 1,000f for its large size.

Some of our memorized phrases:
Nzi ibiciro -- I know prices.
Ndi Umunyeshuri -- I’m a student.
Sindi Umukire -- I’m not rich.
Urahenda -- You are expensive.
Gabanya -- Lower your price.
Si igiciro cy umuzungu? -- Is that the white person price? (My favorite)

This market experience, although fun, was a great example for how I felt the entire time I was in Rwanda. Having white skin automatically raised many uncomfortable assumptions in every person that passed me on the street. It was assumed, among other things, that I am incredibly wealthy, and that I was to be given more courtesy and service than others. The fact that we “muzungus” (white people) were shopping at a local market was different, attracting a lot of stares. The same goes for my wedding experience. I was the only muzungu to attend and this brought forth much unwanted attention. The experience of being an American in Rwanda is much larger than this small article can express. 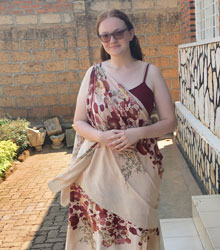 Voss in a traditional Rwandan mushanana dress.The last month of my semester was spent collecting data and meeting with 37 different informants for my final research project. I explored how the generation of survivors, perpetrators, returnees, and other Rwandan citizens face the enormous challenge of discussing the genocide with their children. Understanding how, when, and by whom important conversations about Rwanda’s history are initiated provides insight into the inner workings of Rwandan families.

Here is a portion of one of many intriguing conversations that I conducted. While I was talking with one male survivor, he shared a conversation he had with his four-year-old daughter. He was bathing her one day when she said, "‘Daddy, tell me again who died in your family in genocide." He named several people and she replied, "Why does your family like to die so much? Why is everyone in your family getting killed? What’s wrong with them?"

I'm no expert on parenting, Rwanda, or genocide, but I hope the data I collected can humanize and make known some of the struggles that both children and their caregivers are facing today. More attention must be given to those that are informally influencing the next generation. Acknowledging that the past has had a profound effect on the current generation of caregivers is the first step.