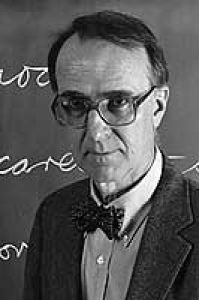 William Gillham was a fixture of the Albion College faculty from 1961-2001.Professor emeritus of religious studies William Gillham, age 84, died unexpectedly in Albion on Saturday, October 14.

Gillham was hired by the College in 1961 as a combination philosophy and religion professor; his arrival doubled the size of both departments and he held that joint appointment for many years.

Over his 40-year tenure at Albion, Gillham helped design key parts of the College's evaluation and accreditation practices, including the unit-based grading system, student course evaluations and a formal faculty tenure process. He played a key role in establishing the Basic Ideas program and taught some of the first Honors Program and First-Year Experience seminars.

“Bill was a dear colleague and remained a close personal friend,” says religious studies professor emeritus Johan Stohl, noting that he and Gillham were in frequent contact, despite being “polar opposites” socially and politically. “We shared a deep commitment to the liberal arts and their importance in society, and we held similar views on theology, philosophy, poetry, music and literature,” Stohl says.

“One of Bill’s favorite courses, much appreciated by Albion students, was Religion and the Arts that brought together imaginative literature, architecture and music,” Stohl says, adding, “In recent years Bill struggled with a variety of health issues; he had a kind and gentle soul, and I will deeply miss our friendship,”

Describing himself as a “cultural conservationist,” Gillham was an ardent champion of the liberal arts tradition based on the Western classical canon. He convened many of the College’s earliest faculty coteries, leading his colleagues through studies of Plato, Dante and Shakespeare. He focused later sabbaticals on fine arts research for his interdisciplinary courses combining religious studies, philosophy, music, literature and visual arts.

Ronney Mourad, professor of religious studies, joined the department upon Gillham's retirement. “Bill was a great resource at the beginning of my career, and we kept in touch over the years,” Mourad said. “He was generous with his time and offered great feedback on my scholarly projects. He was a regular fixture at campus lectures that touched on religious topics.

“He was a truly systematic thinker, and that gave him a clear and definite perspective on the world,” Mourad continued. “You could always count on Bill for a unique and well-considered philosophical position.”

“Bill’s office was right opposite mine for the 11 years we served as colleagues,” recalls Bindu Madhok, professor of philosophy. “He would often walk across the corridor to engage in philosophical conversations on a wide range of topics, especially ethics and Indian philosophy. I will always remember Bill for being genuinely dedicated to a life of the mind until the very end.” 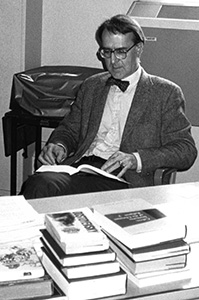 Dr. Gillham in 1985.Wes Dick, professor of history, echoes Madhok’s sentiment. “Bill was always ready for a discussion: on campus, on the sidewalk in front of our house, or in the grocery-store aisle. Although we frequently disagreed, Bill was never disagreeable,” Dick says. “I always looked forward to our engaged conversations, which continued into his emeritus years. Bill, indeed, was a gentleman and a scholar, whose Albion College legacy lives on through his Religious Studies students and his contributions to the ideal of liberal arts.”

An alumnus of Washington University in St. Louis, Gillham was also a graduate of Southern Methodist University's Perkins School of Theology, and he earned a doctorate from Princeton University. He is survived by his wife, Natalie; their sons Jonathan, '84, Andrew, '86, and Benjamin, '92, and Jill Spetoskey Gillham, '94; and several grandchildren, including Robert Gillham, '17, and his wife, Kate Casebeer Gillham, '17.

Members of the Albion College community are encouraged to share their memories of William Gillham on the College's Facebook page or by emailing .