Congratulations to the many Psychology and Neuroscience students who graduated on May 11! To view a Lytro album of photos from graduation, including photos of most of our majors crossing the stage and shaking hands with President Randall, click on the photo. 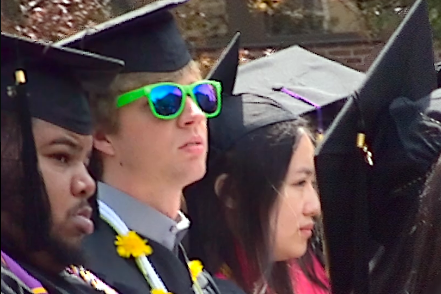 Wilson Named One of Top 25 Psychology Professors in Michigan

W. Jeffrey Wilson, Professor of Psychological Science, was named one of the Top 25 Psychology Professors in Michigan by the web site onlineschoolsmichigan.com. Seven of the Top 25 are at liberal arts colleges; the others are at universities. Wilson has been at Albion since 1999, and engages students in his research examining learning and memory in earthworms. Wilson has served as President of Faculty for Undergraduate Neuroscience (a national organization) and is Secretary/Treasurer and member of the Executive Committee of the Pavlovian Society. Also honored from Albion was Suellyn Henke, named one of the Top 25 Education Professors in Michigan.

Eric Hill, Assistant Professor of Psychological Science, was honored as the New Teacher of the Year at the recent Honors Convocation. Hill is a social psychologist, who teaches courses in that area as well as teaching Introductory Psychology and Research Design & Analysis. He did his undergraduate work at Ogelthorpe University, and completed his Ph.D. at Arizona State University; he joined our faculty in 2010. The department congratulates him for this honor!