Kevin Zabel, ’09, thought he wanted to pursue a career as an investment manager during his days as a student at Albion College. He had an interest in psychology, too, and thought that an understanding of the relationship between one’s need for novel experiences and acceptance of investment risk could potentially provide direction when presenting a portfolio to a client. 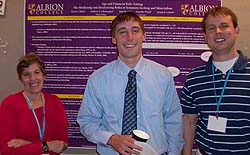 Kevin Zabel, '09, is flanked by Pam Marek, professor of psychology at Kennesaw State University and associate editor of Teaching for Psychology, and Andrew Christopher, professor of psychology at Albion College. The photograph was taken at Zabel's poster presentation during the 2009 Association for Psychological Science convention.Although Zabel didn’t pursue work as a financial adviser – he’s currently serving as the academic program coordinator for the Chicago Center for Urban Life and Culture and weighing his graduate school options – his research on the topic turned into a 93-page senior thesis, and a condensed version was published in the December 2009 edition of the journal Personality and Individual Differences. Albion psychology faculty Drew Christopher, Mareike Wieth, and Jacque Carlson were also listed as authors of the paper in the journal.

“I was doing an internship (with Merrill Lynch) in Chicago, and I found it was more sales-oriented than I wanted,” Zabel said. “(I thought a background in psychology would help me) know how to read people and better understand people’s thought processes and behaviors.

“I had the support of the entire psychology department (in completing the research and thesis),” Zabel said. “(My advisor) Drew provided unwavering support, as well as invaluable guidance throughout every stage of the thesis process. Both Jacque and Mareike provided invaluable feedback on my developing and completed thesis several times, as well as constructive feedback on several practice thesis presentations. In addition to the support rendered by Drew, Jacque, and Mareike, the senior thesis seminar class offered by the psychology department was also instrumental in the improvement of my presentational skills. Not surprisingly, I was well prepared by the time the Elkin Isaac Symposium rolled around.”

Zabel formulated the idea for his research in summer 2008 and started collecting data in the fall. He remained on campus for a few days after the close of the fall semester to analyze the data, and the thesis was completed in mid-March of 2009.

In the study, a total of 299 participants, aged 17–90 years, allocated hypothetical money into mutual funds that varied in risk. Those surveyed also completed a sensation seeking measure (e.g., participants were asked to rate their interest in trying new and exciting experiences), along with several other measures.

The timing of data collection coincided with the stock market’s swoon in the fall of 2008, and that fact could add validity to Zabel’s research.

“The time period (for the survey) wasn’t planned, but it may have been a positive. Previous studies have noted that individuals placed in stressful circumstances are more likely to become more extreme in regards to their original pre-existing tendencies,” Zabel said. “For example, a person who is financially cautious will likely become more cautious when placed in a stressful situation, such as being asked to invest money at a time in which the stock market is falling precipitously.”

In addition to writing his thesis and completing course work, Zabel’s experience with the psychology department at Albion included serving as a teaching assistant with Carlson, aiding in reviewing potential journal articles for Christopher, and attending professional conferences.

“(From attendance at conferences) it was obvious that we were among the best prepared,” Zabel said.