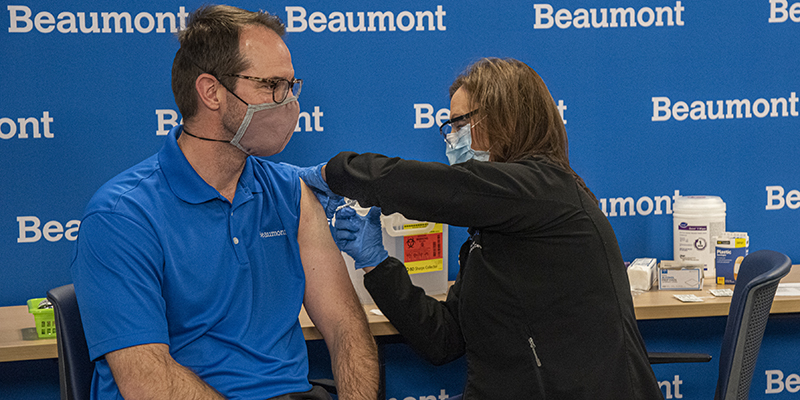 For Dr. Nick Gilpin, ’02, an infectious diseases specialist and armed with a view of the current COVID-19 pandemic few can fathom, there was no choice and no hesitation.

When a vaccine for the virus became available in December, Gilpin, chief medical officer for Beaumont Hospital in Grosse Pointe, Mich., and Beaumont Health’s system medical director for infectious disease prevention, knew what his role had to be.

“There was no way we as a society were going to get through this pandemic without a vaccine,” he said. “So I was approached by our chief executive officer and chief operating officer, who asked if I was willing to be the first vaccine recipient at Beaumont. I do have a front-line role and in that role I saw this as an opportunity to be an ambassador for the vaccine. I believed in it and I felt it was safe and I wanted everyone else to feel that way.”

So on December 15, Gilpin received the first dose of the vaccine produced by Pfizer at its Kalamazoo/Portage manufacturing hub. On January 5 he got the second dose.

“It went really smooth,” he said. “I have physically felt fine. No side effects.”

To bolster public confidence in the vaccine, Gilpin espoused its benefits in front of local and state media and, the day before he received his first dose, he was interviewed by CNN about the vaccine’s safety and, perhaps most important, its necessity.

“Probably 70 to 75 percent of healthcare workers are enthusiastic about the vaccine and 16,000 have already been vaccinated in Beaumont’s healthcare system,” Gilpin said. “We’ve got reassuring data. It’s 95 percent effective but it’s also safe.”

Pre-Med and Psychology at Albion

It has been an interesting journey for Gilpin, a native to tiny Horton, Mich., who was attracted to Albion College for its size and the attention he received from professors.

“It was perfect for me,” said Gilpin, who majored in psychology. “I went to a fairly small high school and I thrived in that kind of environment. The hands-on experience I received at Albion really allowed me to take off. It’s been a big part of my development.”

And that development, despite his major, was always directed toward medicine. He focused on a pre-med track at Albion with an eye toward medical school, and he was accepted into Michigan State University’s School of Osteopathic Medicine.

“When I was in medical school I liked everything,” Gipin said. “Whatever I was doing at that moment, I was interested in. I’d heard that people who have that appreciation make good primary-care doctors, and that’s what I wanted to do.”

One of his first clinical rotations was in infectious diseases. It grabbed him and never let him go.

“I knew right away that’s what I wanted to do for my career,” he said. “I was taken with how interesting it was. It was very cerebral and I got an opportunity to cure patients. As doctors, we don’t really cure high blood pressure or diabetes, but in infectious diseases, you get to cure people. I was taken by that.”

From 2009-11, Gilpin did fellowship training at Beaumont, a collection of eight acute-care hospitals across Michigan, and he’s been part of the Beaumont system ever since.

‘I Hope It’s Made Me a Better Doctor’ 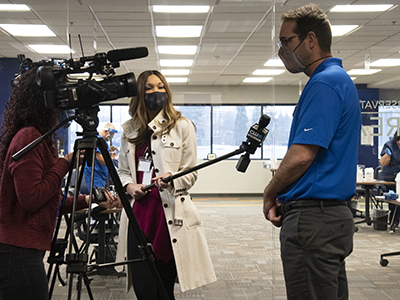 Dr. Gilpin spoke with Detroit media after receiving the second dose of Pfizer's two-dose COVID-19 vaccine.But it wasn’t until early in 2020 that Gilpin truly understood just how important his field of study had become.

“[Coronavirus] started getting our attention in January,” said Gilpin, who helped Beaumont put its pandemic plan into effect. “We just tried to push the message of ‘Let’s not worry until we have to worry,’ and just practice good preventive medicine. But by mid-February, the cat was out of the bag. We were in full pivot. It was everywhere.”

Gilpin, who has not contracted the virus, saw cases skyrocket in the spring before numbers leveled off in the summer.

“But as we pivoted into the fall, it got back to being pretty heavily COVID,” he said.

He added that COVID-19 has challenged the healthcare field, and himself, in ways he hadn’t thought about before.

“I think COVID has shined a very bright light on a real problem in our healthcare infrastructure,” Gilpin said. “I used to think we were prepared for a pandemic and Beaumont has had a plan in place for years. But it’s hard to make a one-size-fits-all pandemic plan. You have to learn from science.”

And while he and many other infectious disease professionals remain concerned about the future of the disease, he remains upbeat and confident about the vaccine.

“It’s been a fast process, faster than any vaccine we’ve developed in modern history,” Gilpin said. “The next closest was polio and that was five years. We did this in six months. There are a lot of people on the fence about the vaccine, but it’s the only way we see the other side of this pandemic.”