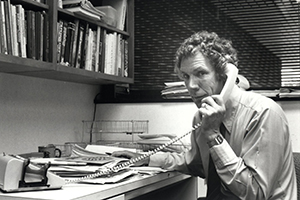 Professor John Philip Hostetler in 1983.Psychology professor emeritus John Philip Hostetler passed away December 15 in Albion at the age of 86. An Indiana native who received his undergraduate, graduate and doctoral degrees from Purdue University, Hostetler moved north in 1964 to spend his 35-year teaching career at Albion College.

Hostetler's interests in physiological and health psychology involved large numbers of both student researchers and subjects. He spent much of his last teachi ng decade on quantitative studies looking at the impact of stress on the immune system, with the assistance of several Albion athletic teams. Hostetler and his students gathered saliva samples before and after students participated in physical or mental activities. The data they gathered helped shed light on how different types of stress impact the immune system.

"He called me 'the New Phil' because he also taught health psychology in the department before I arrived," says psychological science professor Tammy Jechura. "Phil was much more than a mentor to me—he was a kind, caring, loving friend. He was so easygoing, but so full of knowledge, good advice and adventure stories. We liked to laugh about grading craziness and teaching research design and analysis. He was a solid figure in Albion and someone I really admire and love." Sharon and Phil Hostetler in 2017. In 1992, Hostetler became the second Albion professor to participate in a teaching exchange program between the College and the University of Cape Town (UCT) in South Africa. While serving as a guest lecturer in psychology, medical anthropology and social work, he also pursued research on the effectiveness of traditional medicines and treatments by tracking patients' antibody levels. The Albion/UCT faculty and student exchanges came about through Albion's desire to join in apartheid resistance, and Hostetler continued to support UCT student scholarships for many years.

With his wife, Sharon (longtime secretary for the Department of Religious Studies), Hostetler participated in the Holocaust Studies Service-Learning Project and a mission trip to Haiti before his retirement, and the Hostetlers continued to participate in and support similar projects. Among many community involvements, Hostetler served for decades in the Albion Area Ambulance Service and the Albion Health Alliance. Hostetler also was an active leader in Albion's First United Methodist Church, even taking electric bass lessons in his 70s when the church needed a bass player.

He is survived by Sharon, his wife of 46 years; four children; four stepchildren; 15 grandchildren; and two great-grandchildren, with many Albion alumni among them.