For Psychology Major Griselda Iñiguez, '19, a Resolute Ride at Albion

No one has to talk to Griselda Iñiguez, ’19, about dedication and hard work. It has been a part of who she is for as long as she can remember.

Take, for example, her mere task of getting to high school every day. 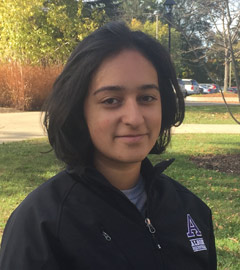 Griselda Iñiguez, '19, who will attend the Society for Neuroscience conference next month in California, has an eye on graduate school and a career in equine therapy.

From her South Side of Chicago home in the Back of the Yards neighborhood, she had to take two buses and two trains just to reach Northside College Prep High School. She’d leave at 5:30 a.m. and the journey up and back was three hours.

“I had a whole routine,” Iñiguez says. “I’d sit in the same seat and I’d carry my pepper spray. I’d sleep on the way.”

But it forged in her a belief in herself and in what she hopes to do one day.

Iñiguez knew she wanted to go to college and she knew, with her longtime love of horses, that despite the lack of verdant fields and galloping equines in her neighborhood, she wanted to find a college that had an equestrian center.

Her online search led her to consider Albion and another school in Pennsylvania.

“I went to Albion first and I thought, ‘Why bother going to the one in Pennsylvania?’” she says. “Albion was so welcoming.”

That was four years ago and, for Iñiguez, it has been an education both inside and outside the classroom.

Nothing came easily for her, admitting, “My mom was afraid to leave me [my freshman year]. I came in expecting to be excluded.”

But a funny thing happened. She found her way to the Nancy G. Held Equestrian Center, even though she’d never ridden a horse in her life, much less competed. And she struck up friendships with barn manager Ray Ripple and events coordinator Carolyn Killewald, who saw in Iñiguez the drive and determination to be more than she was.

And she worked. A lot. She started at the lowest levels—cleaning out the barns, haltering horses, learning what needed to be learned.

And she was always trying to ride, though earning the money necessary for the lessons was difficult.

“I took one lesson,” Iñiguez says. “But I wanted more.”

As well, she dove into her studies, declaring her major in psychology with a concentration in neuroscience, and minoring in sociology.

She has been editor of The Albionian and has worked elsewhere on campus, at the Kellogg Center and in the Registrar’s office as well as at the equestrian center.

This year, she is finally competing with the Western Riding team under new coach Adam D’Agostino. And now that it’s a varsity sport, she can take lessons for free.

These days, she admits she’s a much different person that the one who stepped uncertainly on campus as a first-year student in fall 2015.

“I feel I’m more resilient,” she says. “I have a lot more personal responsibility and I’m a lot more independent.”

Drew Christopher, professor and co-chair of psychological science and one of the faculty members who has helped in Iñiguez's development over the years, knows that, too.

“She knows what she wants and you always know where you stand with her,” he says. “She’s very proactive.”

Iñiguez will join another psychology professor, Jeff Wilson, on a trip to the prestigious Society for Neuroscience conference Nov. 3-7 in San Diego, California.

“There will be 25,000 people there and it will give her a chance to see the diversity the field has to offer,” Christopher says. “And it has a lot to offer.”

Iñiguez will graduate this spring and plans to take a gap year while waiting for her boyfriend, currently a junior, to graduate. Then her plans include graduate school and a career that combines her love of horses and her love of psychology, working in equine therapy to help children.

It has been a long journey from Chicago to Albion, but for Iñiguez it has all been worth it.