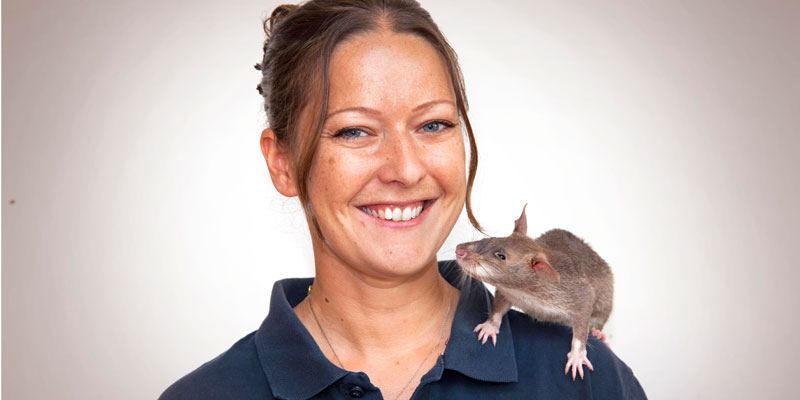 Moving to Tanzania, Cindy (Cardwell) Fast, '08, expected to see a lot of new sights—but one related to her expertise was especially surprising. "At our land mine training center, every single rat develops this behavior of trotting behind their trainer without any signaling or harnesses attached," Fast marvels. "The rats aren't trained to do this and are literally free to go where ever they want, but they choose to scurry along behind their trainer."

As it turns out—thanks in part to Fast's current work—there are a lot of very surprising things that rats do. Through the nongovernmental organization APOPO (a Dutch-language acronym), African giant pouched "HeroRats" not only map minefields, but they also process tuberculosis (TB) tests and are learning other potentially lifesaving skills.

In many ways, Fast explains, rats aren't just good—they're better than other options for getting these jobs done. Like dogs, rats have great noses—but unlike dogs, they're too light to accidentally detonate mines, are substantially cheaper to keep and will happily work for anyone with a treat. And rats can detect even a few molecules of TB with just a few sniffs, compared to a human technician who must prepare slides for much slower visual scrutiny.

There are electronic machines that can do these jobs, but try using one without access to electricity—a common condition in the places where APOPO works.

"Rats don't require power cables or backup batteries," says Fast. "They don't short-circuit when working in dry and dusty or wet and rainy environments, unlike many high-tech devices."

As head of training and behavioral research and development, Fast wears several hats. She and her team look for new jobs that rats can do, design how they'll be taught, then work with the human staff who will actually teach and handle the rats. Fast also oversees training for APOPO programs in four other countries, supervises interns and volunteers, directs the breeding program, and even ensures that the rats have appropriate veterinary and retirement care.

The results are beyond impressive. Over the past two decades, APOPO’s HeroRats have found more than 106,000 landmines and unexploded ordinances, clearing nearly as much land as the state of Kansas.

"Every year, explosive remnants of war cause over 6,000 casualties worldwide, and nearly a third of these victims are children," Fast explains. She further notes that beyond the great human cost, minefields "are a barrier to development, constraining communities and denying access to fertile land, travel routes and basic needs."

As TB testers, an APOPO rat can evaluate some 300 sputum samples per hour, compared to 25 per day for a technician with a microscope. It's critical work on a planet with more than 10 million reported new cases of tuberculosis in 2016, with more than a million dying from this treatable disease. Over the past decade, APOPO rats evaluated some 430,000 samples and discovered more than 12,000 TB patients who were missed by local clinics.

An Introduction Becomes a Collaboration

"I was blown away by her intelligence and poise," says APOPO behavioral research technician Kate Sears Webb, '16, who met Fast when she visited Albion in 2015 to receive the College's Young Alumni Award. Webb left a research position with Duke University’s Center for Child and Family Policy in order to work with Fast and APOPO. She now investigates how rats learn and whether they can be trained for new tasks.

Webb's APOPO work has revealed new insights into rat cognition, including evidence that individual rats can learn and retain multiple target odors. It may be possible, Webb says, that one rat could search for multiple scents, or undergo new "job training" later in life.

"It's exciting when our experiments reveal unexpected results," Webb says. "But as much as I love working on specific experiments, the overall goal of APOPO—to provide an innovative solution to humanitarian issues—is the true reason I love my job."

That said, Webb admits, the rats themselves are a job perk. "One of my first jobs was to take rats out for playtime. I took a rat [named] Jane Goodall out to play and she sat in my lap and licked my fingers for over 15 minutes," Webb recalls. "This early experience made me feel at ease with the rats and helped me learn to appreciate each rat and its individual personality."

Fast, Webb and APOPO are building on their extraordinary success. Among other potential new programs, Fast is especially excited about training the rats to search collapsed buildings for disaster survivors and scan cargo for smuggled wildlife or other contraband.

"These applications are also very exciting prospects because they involve developing novel approaches to the unique challenges posed by the working environments," Fast says. "For example, what is the most effective method for the rat to remotely communicate to a human handler when it has found a target odor under tons of rubble or inside a shipping container?"

With their first child due late this spring, Fast and her husband have no plans to leave Tanzania (Webb plans to begin doctoral studies in the U.S. later this year). APOPO is expanding its land-mine-eradication efforts into Cambodia, Colombia and parts of the Middle East, and Fast has assembled an international scientific advisory committee of neuroscientists, psychologists, ethologists and chemists, who will help to further advance her work. There's a lot to do.

It's definitely not what she had imagined, working in her UCLA and Rutgers research labs, but the work, Fast says, isn't so different.

"I always envisioned my future as a university professor where I would teach and mentor the next generation while managing my own translational research using rodent models aimed at improving the human condition," Fast says. "What I do now isn’t that far removed, except that my teaching doesn’t take place in large lecture halls and the results of my research have more immediate impact on the human condition on a global scale."

She concludes, "I think it is the goal of most scientists that their work may someday have a positive impact on the world. I’m fortunate that my research with APOPO has a real and measurable impact on saving lives every day."

A graduate of Albion High School and Albion College, Cindy (Cardwell) Fast earned a doctorate from the University of California, Los Angeles, and completed a postdoctoral fellowship at Rutgers, the State University of New Jersey. She is the 2017 gold-medal recipient of the New York Academy of Sciences' James McKeen Cattell Award, recognizing the best American psychology dissertation submitted over the previous two years.