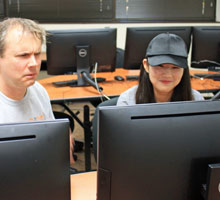 Wang with her adviser, psychology professor Drew Christopher. She is majoring in communication studies and psychology, and is the daughter of Chenggang Wang of Sichuansheng, China, and Linwei Yang and Qiang Peng of Chengdou City, China.

Like a lot of students leaving home for college, Xingzhu "Ceci" Wang was encouraged by family and friends to keep them updated via Weibo and WeChat, two Chinese social media platforms. Unlike a lot of students, "I stopped doing this because I was confused as to whether it helped people really know about my life in Albion," Wang says. "Even if I post everything, there can be a lot of misunderstandings."

In an era where everyone from presidents to pet goldfish has a Twitter account, social media is a hot topic for psychological researchers. Supported by Albion College's Foundation for Undergraduate Research, Scholarship, and Creative Activity (FURSCA), Wang uncovered some surprising information about social media usage and how people behave in creating a certain image of themselves for others to see.

Wang focused on the intersection between heavy Facebook users and their tendency to use defensive or assertive self-presentation. Social psychologists have long known that "people tend to be more boastful (or 'assertive') in front of strangers, and more modest in front of friends," Wang says. "With friends, people tend to use more 'defensive' language—they spend more time justifying their behavior to reduce negative reactions from others."

Given this phenomenon, Wang hypothesized that heavy Facebook users would do more "friend" communication with defensive language, while less frequent users would possibly use social media to boast about exceptional activities.

What Wang found, however, was that heavy Facebook users seem to defy this human tendency. Her most assertive self-presenters were also among her heaviest Facebook users.

To explain her finding, Wang turned to another social psychology phenomenon: most people see themselves as “above average” compared to those around them. Social media, she says, could enhance this self-perception.

“The more that people use Facebook, the more self-affirmation they'll attempt to get from it. People are practicing showing the best of themselves, and by doing this, they'll get used to the best image of themselves,” Wang says. “It's like 'fake it until you make it.'”

Wang stresses that heavy Facebook use doesn’t have to be a bad thing—but she does wonder if it could pose a problem for some people.

With social media, “you might take a lot of pictures and pick only one to exhibit,” she explains. “This process may lead to self-doubt and the realization that you’re picking just the best of yourself. This could lead me to think that people who are insecure, they could become obsessive with Facebook because it allows them to control self-presentation in a way you can’t do face-to-face," she says.

And while Wang's study was focused on self-presentation, the results raise questions about social media and self-image, too. "When we are posting things on social media, we have to form impressions about ourselves first before we show that to other people. It's an interesting process that you become what other people think of you, even while you present what you see as yourself."

Despite ending up with a lot more questions, Wang did find one “answer” about how to look at social media.

“Sometimes when I look at other people's posts, I think that other people are doing better than me—going to awesome places and making awesome friends and I wonder if I’m trying hard enough,” Wang says. “But then I think, compared with a real life that has ups and downs, the beautiful flawless self-presentations were just a sophisticated show. It’s carefully designed rather than naturally happened. Therefore, there’s no reason to worry about 'being worse off' than other Facebook users.”