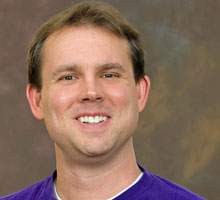 "Making a career out of teaching, it is nice to be recognized by one's peers for efforts to improve student outcomes not only at Albion, but across the country as well," Christopher commented about the award. He noted further that colleagues, peers, and former teachers and students also deserve recognition for their impact on his skills and career. "It's like winning the Stanley Cup," Christopher said. "Lots of other names besides mine should appear on it."

Psychological science professor Barbara Keyes noted that in her 36-year career with Albion College, Christopher was the first nomination she ever submitted for the level of national award. "Drew leads and teaches by example and inspires others to strive for excellence," Keyes said, noting that Drew's influence is felt equally by colleagues, professional peers, and students. "I can think of no faculty member more worthy of this award."

A social psychologist with a number of research interests including work ethic, risk-taking and materialism, Christopher has published dozens of journal articles in collaboration with students and colleagues. He has won numerous teaching awards and serves as editor for the journal Teaching of Psychology. A member of Albion College's faculty since 2001, Christopher is a graduate of Stetson University, holds an M.B.A. from Southern Methodist University and has master's and doctoral degrees from the University of Florida.