Fifty students gain valuable experience as they survey the thoughts and opinions of the electorate. 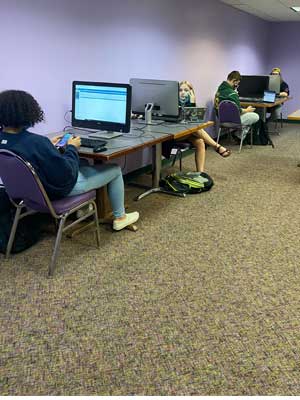 A pivotal election looms and as anyone who owns a cellphone or landline or both can attest, political polls are everywhere and inescapable. From CNN to FiveThirtyEight to Rasmussen Reports to Gallup to Fox News to Pew Research Institute to RealClearPolitics and so many more, polls are ubiquitous.

So, in an effort to gauge public opinion, provide employment opportunities and offer a front-line view of how the process works, some 50 Albion College students were hired in October to help conduct surveys for the Siena College Research Institute (SCRI). The institute partners with The New York Times to conduct what is considered one of the more accurate and scrutinized political polls in the U.S. Indeed, it is viewed by many political pundits as the premier academic public polling institute in the country.

“President Johnson and I usually cook something up in every conversation we have,” Levy said. “I called to see how he was doing with the move and asked if he’d like to have Albion students participate. I said why don’t we get a cluster of Albion students trained, allow them to participate in the project, and maybe then Albion can go forward and replicate what we’re doing in other polls as our partner.”

From there, Albion’s Institutional Advancement office recruited student callers, some of whom have worked in IA previously, making calls for other projects including fundraising.

“Dr. Johnson was looking to provide meaningful employment on campus in a time when students had lost employment off campus,” said David Morris, an engagement officer on the IA staff, who interviewed and hired the 50 students, most of whom work 10 hours a week. “Don [Levy] said they needed 500 extra hours of calling a week. I hired them and Siena took it from there.”

The students either work from the two upstairs side dining rooms in Baldwin Hall (the computers and chairs are at least six feet apart) or in their residence hall rooms, and they ask specific questions created by SCRI for particular areas of the country.

The responses must be recorded verbatim, Levy said, and there’s no room for callers to ad-lib conversations. If the person contacted doesn’t complete the entire survey (which can last from 10 to 15 minutes), it won’t be registered. SCRI monitors the calls and the responses and collects the results in its database.

“We’ve been highly successful with this,” said Levy, adding that the Siena/New York Times poll focuses on a new and more detailed model for likely voters surveyed. “In the 2018 election, we got 93 out of 100 polls right.”

Albion students have been conducting surveys across the country but have focused in the closing weeks on so-called “swing” states that include North Carolina, Iowa, Ohio and Georgia.

But it’s often challenging to get Americans to cooperate.

“People will say, ‘I can’t deal with this right now,’ or ‘I don’t want to talk about politics,’ or ‘I don’t want to share my opinion,’” said Mo Coffman, ‘23, a psychology major from Portland, Ore. “It can get a little frustrating but that’s the way it is. Some nights I’ll get seven responses and some nights there are absolutely none.”

“It’s an interesting time to be a pollster,” Levy said. “Simultaneously, there has never been more interest in what we do and less interest (in the public) helping.”

Yet despite those frustrations, which have been common to pollsters for decades, students believe the work is valuable and necessary.

“The Siena poll is very concise and clear,” Coffman said. “I think it’s really useful to have people calling people and collecting the data and not using computerized questions. I think it’s very valuable to collect that information and see where the attitudes are and where the patterns are.”

“I think they’re helpful in engaging the public and their sentiment,” said David Cipriano, '21, a political science major from Lake Orion, Mich. “I don’t think they should be relied on 100 percent and the 2016 election is all you need to see for that. But they’re certainly helpful in gauging opinion.”

Once the election season is over, there are plans for Albion to continue working with SCRI on other polls on new topics. President Johnson hopes this is just the start for Albion in this field, where the horizon appears limitless.

“We are exploring how we can make the experience deeper and broader,” he said. “It’s great experience for students and contributes to public understanding.”