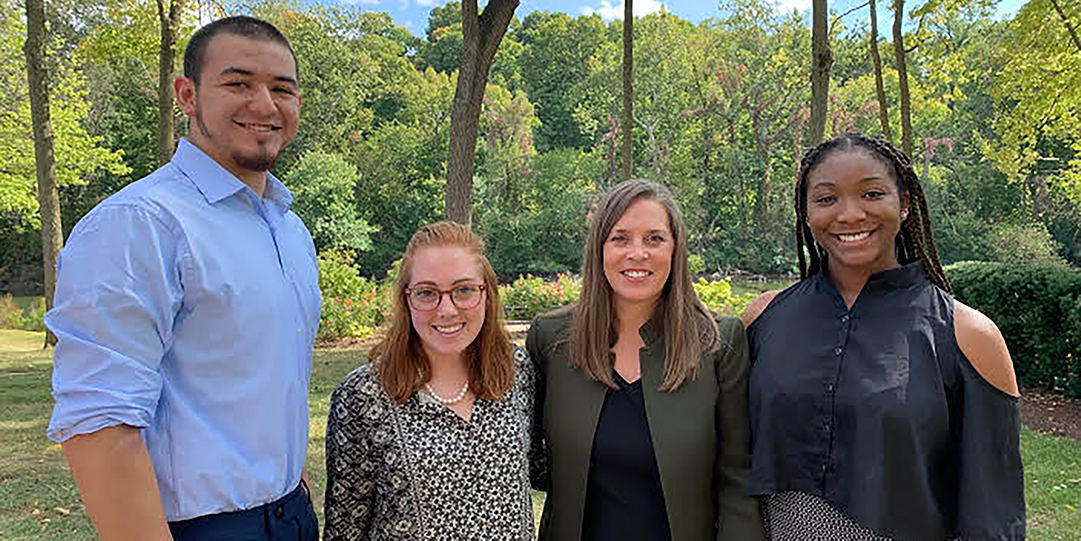 “I expect to see more efforts to reform,” says the Albion political science faculty member and director of the College’s honors program. 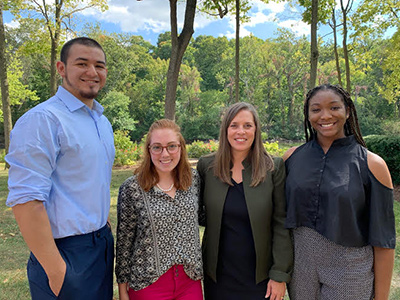 In Fall 2019, Dr. Carrie Booth Walling (second from right) took Albion students Marco Colmenares, '20, Caitlin Cummings, '22, and Morgan Armstrong, '21 (left to right), to a national conference in Dayton, Ohio, where the students heard from a founder of Black Lives Matter along with other activists, policymakers and researchers. The students are assisting Walling on a forthcoming book, writing a "toolkit" chapter specifically aimed at developing student activism. The United Nations is celebrating its 75th anniversary this year and Carrie Booth Walling, an Albion College political science professor and longtime observer of the UN, remains hopeful that more anniversaries will follow for the often besieged organization.

“I’m cautiously optimistic,” says Walling, who has studied the UN for years and brings that interest and perspective to several of the courses she teaches. “Multilateralism is under threat. We are witnessing a walking away from international organizations by those who have traditionally led them. I don’t think it’s certain the UN will be here for 100 years, but I think it will be. It depends on the world’s people and if they value that institution, and if member nations generate more solidarity.”

Walling has made her views on the UN known for years in op-ed pieces and interviews and, most recently, in two New York Times pieces in April (one in Spanish she co-authored with Harvard’s Kathryn Sikkink) and then another in September on the issues faced by the UN. She also took part recently in the International Horizons podcast discussing the future of the UN sponsored by the internationally renowned Ralph Bunche Institute.

Walling has been interested in the United Nations since her days as an undergraduate student in the early 1990s. At the time, the genocides in Rwanda and the former Yugoslavia were ongoing and, as she observed, the human toll stunned her.

“It shook me to my core,” she says. “It grossly offended me. It was in that context that I discovered the framework of human rights. Human rights was an empowering framework to reject what was going on there. This was wrong and peoples’ human rights are being violated.”

That’s when her interest in the UN, and specifically human rights intervention, was sparked. Since then, she has been much in demand as a writer, pundit and teacher of human rights. And she has watched as the UN has dealt with the issue. In 2013 she wrote the book, All Necessary Measures: The United Nations and Humanitarian Intervention.

“The UN is not just about securing states but securing rights of actual people, and progressively over time the UN has gotten better in its ability to protect human beings from mass atrocity,” she says.

A Need to Evolve

But to her thinking, the organization, which now features 193 member nations, is at a crossroads that requires a change in attitude and, perhaps, direction.

And while still a firm believer in the mission and benefits of the United Nations, she knows it must evolve.

“Over time, as we’ve gotten further away from the experience of two world wars and nuclear destruction, we’ve lost a little bit of perspective of why the organization was created,” she says.

Political wrangling, especially between UN superpowers such as the United States, China and Russia, has often diluted the goals.

“Sometimes [those arguments] can make the UN look dysfunctional,” Walling says. “But that’s the purpose—to allow governments to argue with each other in a nonmilitary manner.”

Bringing It Back to Her Students

Walling, who is also director of Albion’s Prentiss M. Brown Honors Program, believes that a basic knowledge of international politics and foreign policy is vital to everyone. And that’s what she spells out to her students in her Introduction to International Politics course.

“Just like we have a right to contact our local representatives, American voters should have a role in foreign policy decisions,” she says. “International politics too often is left up to experts, and I’d like more people to be aware of decisions your elected officials are making in foreign policy.”

Walling will be watching the UN, as she has for years, to see if the organization that remains so vital, if unappreciated, will start to make the necessary changes to adapt in an expanding global society.

“Young people are imagining a UN, but one that’s more inclusive of young people, more geographically salient, more inclusive of gender and race,” she says. “And one that’s much closer to the people. I expect to see more efforts to reform. There are many reasons to be critical of the UN, but that criticism reflects a desire for something to be better. It’s because we care that we criticize things in the first place.”