“I want students to think there are things that belong to them,” international law expert says. 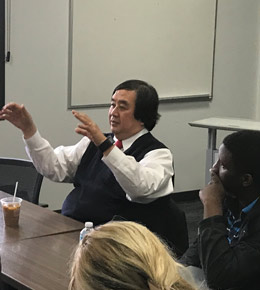 The day after Donald Trump’s presidential election victory in November 2016, professor Harold Koh began putting together plans for his book.

“I had a town hall meeting the next day and a student said, ‘I didn’t want Trump to win but I still want America to win. Is that still possible?’" Koh recalled. “I said yes because of the rule of law. Donald Trump is not above the law.” Though critics, including Koh, believe there is evidence to the contrary, his thesis endures: America is a country of laws and the rule of law will always endure.

He is making that statement in his new book, The Trump Administration and International Law, where he says an effective counter-strategy has blunted many current executive-branch policies.

He also brought that message to Albion College April 4-5 as part of the Phi Beta Kappa Visiting Scholars Program, where he spoke, in total, to some 100 students from pre-law, political science, philosophy, public policy, history and more on topics that ranged from human rights to immigration to the plight of immigrants. He also delivered a lecture to another audience in the Bobbitt Visual Arts Center auditorium.

The message? “I want students to think there are things that belong to them,” he said, pointing specifically to the age-old belief that America remains a leader in the world and that no leader should be allowed to usurp that. “It’s a fight, and you have to pick what side you’re on.”

Koh was born in Boston but his parents emigrated from Korea during the height of the Korean War. He says his mother was born just miles north of the 38th Parallel, where democratic South Korea and totalitarian North Korea were separated.

“If she’d stayed, I would never be here,” said Koh, who has visited both North and South Korea frequently over the years. When they came to the United States, they instilled a love and respect in the country that Koh keeps to this day.

Koh, who is in his first year as a Phi Beta Kappa lecturer, said one reason he accepted Albion’s offer was because of his acquaintance with College trustee Mark Newell, '77, a former Harvard graduate school classmate. Another reason was simply his love of speaking with students at small liberal arts colleges.

“The strength of America is higher education and freedom of the press,” Koh said. “And I love the opportunity to meet new people. I also love coming to a college I don’t know much about. That’s a great gift.”

He remains confident about America’s future and looks at the current political landscape as a passing aberration. “This is the greatest country in the world,” Koh said. “America stands for something very important in the world.”

But he also has a warning for future generations: “My father used to say, ‘If you stand for nothing you’ll fall for anything.' I want students to stand for something.”