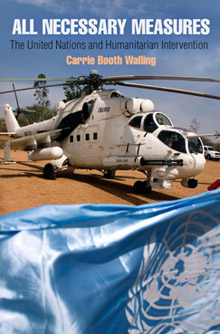 The monitoring of human rights, meanwhile, was the responsibility of commissions established by the UN, but there was a strict separation between the Security Council and the human rights watchdogs until 1991, when human rights concerns entered the council’s domain as a result of Iraq’s incursion into Kuwait that year.

Since 1991, the Security Council has been inconsistent in its response to extreme human rights violations, Walling said. The council intervened to stop mass killing in Somalia, Bosnia-Herzegovina and Sierra Leone, but it stayed out of the situations in Rwanda, Kosovo and Sudan.

“There is inconsistency in how the Security Council has acted, but it is remarkable that they have acted in defense of human rights at all. I looked for patterns between cases, looking at situations on the UN agenda that had high levels of violence according to the political terror scale,” Walling said. “My goal is to explain why the Security Council intervenes in some cases but not others.

“I put forward a possible explanation [for Security Council action] which needs more testing,” she added.

Walling demonstrates the pattern she found stems from the relationship between national interests and the core values of Security Council members. Humanitarian intervention becomes possible in the most extreme situations and when the majority of Security Council members come to a shared understanding of the conflict, perpetrators and victims—and probable when the Council can justify defending human rights as complementary to the protection of state sovereignty.

“Security Council members must agree on how the conflict is characterized, whether it is a civil war or an ethnic cleansing. It is easier for the Security Council to make the case for intervention when the aggressor causing direct harm to a group of people is clearly defined and all you have to do is stop that aggression. Intervention is only considered legitimate in cases of mass atrocity, including cases of ethnic cleansing and genocide.”

“Human rights have become such a powerful idea that now governments have to justify their behavior,” Walling said.

Walling and Susan Waltz, professor of public policy at the Gerald R. Ford School of Public Policy at the University of Michigan, will soon launch a website about the history of human rights standards.