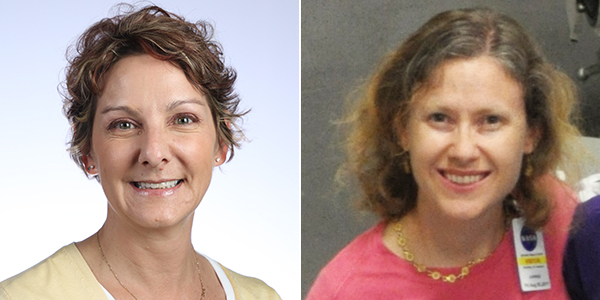 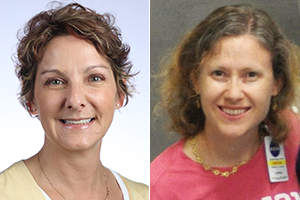 Dr. Nicolle Zellner (left) and Dr. Vanessa McCaffrey from Albion College's Departments of Physics and Chemistry, respectively.The "Big Bang" may have started the universe but it's likely that smaller bangs played a key role in life on Earth, say Albion College physics professor Nicolle Zellner and chemistry professor Vanessa McCaffrey. They (along with their former student Jayden Butler, '17) share their fascinating findings on the interspace dispersal of glycolaldehyde (GLA) in an article recently published by the journal Astrobiology.

Their project, funded by NASA and conducted at the Experimental Impact Laboratory at Johnson Space Center, exposed GLA samples to impact pressures between 4.5 and 25 gigapascals—at the low end, forces far greater than the deepest ocean water pressures, or that of a piano dropped from hundreds of miles above the Earth. Albion's team discovered that GLA, a sugar important in the chemistry leading to ribose, can retain its integrity under such intense pressures.

“Experiments that simulate impacts have shown time and time again that biomolecules found on comets, asteroids and meteorites are not completely destroyed,” says Zellner. “The fact that GLA can remain intact under these kinds of pressures provides another piece of the puzzle in our understanding of how biomolecules survived impact delivery to an early Earth.”

In addition to the GLA remaining unchanged throughout such intense conditions, McCaffrey noted that several new molecules were seen after impact and that some of these could have important biological implications.

Zellner notes that the Albion work predates recent observations by astronomers, who reported that GLA is present on several comets. These findings support the Albion team's assertion that GLA was likely dispersed throughout the solar system—and onto Earth—via comet impacts.

The project findings, says Zellner, add an important piece to the picture of how life began.

"Everybody assumed GLA was a starting molecule for ribose or amino acids, but little consideration was given as to its source," Zellner says. 'We're showing what the source of that molecule could be.”

Physicist and planetary scientist Nicolle Zellner is the Herbert H. & Grace A. Dow Trustees’ Professor in the Sciences and current chair of the Physics Department. Vanessa McCaffrey is an organic chemist at Albion College. Jayden Butler, ’17, holds a master's degree from California State University-Los Angeles and is an intern with the Jet Propulsion Laboratory. Their article, "Cometary glycolaldehyde as a source of pre-RNA molecules," is available via Astrobiology. This project was funded by the Exobiology and Evolutionary Biology program at NASA.