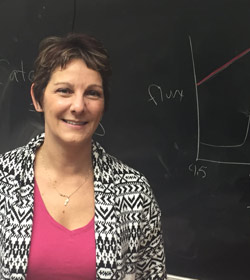 Physics professor Nicolle Zellner's research has contributed to a theory among a growing number of scientists that Earth and the Moon, along with the inner planets, may not have been subjected to a quick, violent bombardment in its early years as once believed, but a more prolonged event that impacted when life on Earth began.The solar system, and everything in it, was created from pure chaos. And Earth? Talk about being a sitting duck in a cosmic shooting gallery.

Our home, as well as the other inner planets such as Mercury, Venus and Mars, was relentlessly pummeled for billions of years by all manner of space debris, including asteroids hundreds of miles wide, to the point where parts of the Earth’s surface melted away and dashed any hopes of life forming.

That was some 4 billion years ago, and that has been the template of knowledge for everyone from scientists to schoolkids on how Earth and, by extension, the solar system were formed.

But recent ongoing studies are starting to cast doubt on the nature and timing of what came to be known as the Late Heavy Bombardment (LHB).

One school of thought remains that Earth, the Moon and other inner planets were bombarded in a relatively rapid period of time. Violent and unceasing, Earth was lucky to survive constant cosmic attack.

But another, espoused by a growing number of scientists including Albion College physics professor and lunar expert Dr. Nicolle Zellner, believes this bombardment occurred over a much longer period, and while certainly massive in its impact, it may not have been as violent as originally believed.

“The Earth and Moon were not battered in a narrow period of time, but bombardment was more drawn out for hundreds of millions of years,” Zellner said.

Years of research from scientists, including contributions from Zellner and her study of lunar impact glass, calls into question the early violent history of both the Earth and the Moon and, perhaps more important, it offers a glimpse of when life was really able to form on our planet.

“There’s no question that something has happened in the past few years that has profoundly upset the apple cart,” said Mark Harrison, a University of California at Los Angeles geochemist who was quoted, along with Zellner and other scientists, in a January Nature.com story headlined “Bashing holes in the tale of Earth’s troubled youth.”

The theory has intrigued the scientific community for years—and Zellner since her graduate school days back in the late 1990s—and began to pick up steam in 2005 with research known as the Nice model (for the city in France where it was conceived). It suggested that the LHB was caused by the gravitational pull of Jupiter and Saturn causing cosmic instability that altered the orbits of Neptune and Uranus as well as the trajectory of comets and asteroids. It was those comets and asteroids that did so much damage to the inner planets.

Zellner has earned an international reputation for her study of lunar impact glass, the remnants of lunar surface material that form glass from the heat of an asteroid impact. She is one of a handful of scientists studying the properties of that glass, collected by astronauts from the Apollo moon missions of the early 1970s.

“When I was looking at my own lunar impact glass samples, I was not able to find anything older than 3.9 billion years,” Zellner said. “I saw ages tailing off from 3.4 to 3.8 billion years ago, and I found stuff younger than that.”

Indeed, the last Moon mission was Apollo 17 in 1972, but from the six missions that landed on the Moon, more than 800 pounds of rocks were brought back to study and, for Zellner, the impact glass from those samples helps tell the story of Earth’s infancy as well as when life might have formed.

“There’s a lot of information,” she said. “Lots of impact glasses can be found in the Apollo samples and they can tell us when the Earth and the Moon experienced frequent impacts and when impacts were infrequent enough for life to develop. There are so many samples to look at because when we got samples from the Moon, we found lots of impact glass.”

In fact, Zellner believes the Apollo samples, even after nearly five decades, are more valuable than ever to scientists today.

“Now we have the technology and experience to explore them in more detail,” she said.

Every theory brings new questions, and this is no different. And while Zellner is a proponent, she also knows science is always evolving based on the latest facts.

“As scientists we’re training to be skeptical,” she said. “Will we ever know everything? Probably not. But we know an awful lot now. But you can never have too much data, and there’s certainly enough here to keep me busy.”