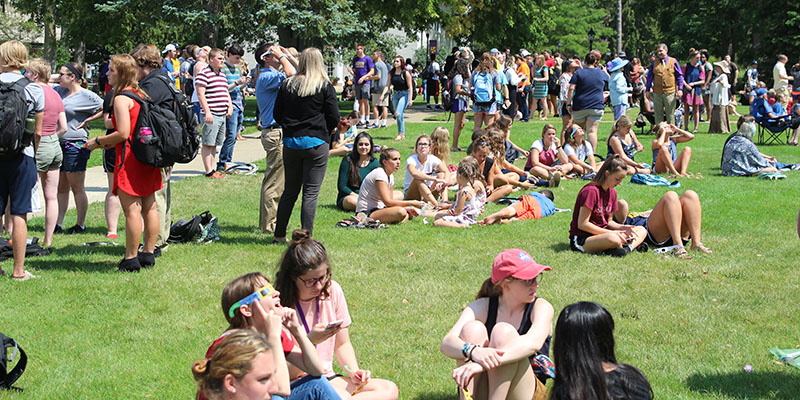 Hundreds gathered on the Albion College Quad to watch the August 21, 2017 solar eclipse.

By 1 o'clock Monday afternoon, the crowd, and the clouds, began to gather on the Albion College Quadrangle. 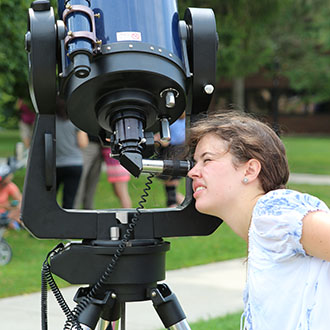 The Physics Department and Astronomy Club set up telescopes for viewing the eclipse more closely on the Quad and on the roof of Palenske Hall.And for the next 20 minutes, the crowd and the clouds battled, with those gathered booing when the clouds covered up the sun, the star of this particular show. And when the clouds would clear, the crowd would cheer.

Finally, as the clouds grew dark and angry off in the distance, the sun was all alone and the crowd, which numbered in the hundreds at its peak, got to see what they had come to see.

The long-awaited eclipse lasted for nearly two hours as the moon crossed in front of the sun. In this area, the moon covered nearly 90 percent of the sun and at its peak at 2:27 p.m., the area was cast in a yellowy, murky haze.

“It’s a once-in-a-lifetime thing,” said Reilly Kofflin, who came to Albion from Jackson with her friend Joe Versluys to watch what was a near-total eclipse in Michigan. Through 14 other states it was the first total solar eclipse to span the continental United States in 99 years. “It’s never happened in my lifetime,” Kofflin said.

And Albion College was ready for the event that became a national phenomenon.

With assistance from the Education Department and Physics Department, Albion College’s Astronomy Club coordinated, with help from College planetary scientist Nicolle Zellner, a free public event that offered views of the partial eclipse through three 10-inch telescopes, one in the Quad and two on the roof of Palenske Hall. The event also provided free eclipse viewing glasses, which proved to be a rare commodity nationwide as eclipse mania took hold.

And even the approximately 1,000 pairs of glasses provided on the Quad were gone by 2 p.m.

“There are more people than I expected,” said Madi Darby, ’20, a native of Grand Rapids and co-president of the Astronomy Club who coordinated viewing a line of people who wanted to view the show through a 10-inch telescope on the Quad. “This is pretty special.”

Jack Hines, ’20, club co-president from Northville, was in charge of the public viewing through the two telescopes on the Palenske Hall roof. He ran out of glasses up there, too.

“We had to turn people away up here and send them to the Quad,” he said. “There have been a ton of people. This is the biggest thing we’ve ever done.” 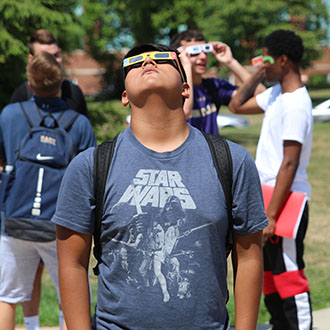 The College had approximately 1,000 pairs of safety glasses available on the Quad for the public viewing event.It was an event that appealed to everyone of all ages and all interest levels. Parents brought their young children. Albion College students stepped out of class and looked up in amazement. Visitors came to campus to lie on the grass and watch the spectacle.

“There was a lot of talk and frenzy going around,” she said. “This is something that happens so rarely.”

She recalled a time when she was in middle school and watched a solar eclipse through a rudimentary homemade pinhole camera. This time she held up a pair of special eclipse glasses provided by the College.

“I came prepared,” she said.

For her, the eclipse was something truly primal and she could feel it.

”I feel very energized today,” she said. “I feel buzzy. We are all attuned and I think there’s definitely something to that.”

And as the moon moved out of the sun’s path and the crowd dispersed, the clouds returned. The show was over.