There is something about a solar eclipse that still stirs the human soul.

So when the moon passes between Earth and the sun on the afternoon of August 21, Albion College planetary scientist Nicolle Zellner will be watching, along with millions of others nationwide, with a mixture of awe and wonder.

“It ties us historically to our ancient ancestors,” said Zellner, professor of physics. “Solar eclipses have been happening for millennia. We see them drawn on rocks and we see them written in ancient observing records from the Chinese. There’s something primordial about that. It ties humanity together through the eons.”

The first total solar eclipse to make its way across the length of the United States in 99 years is set for, coincidentally, the first day of the 2017 fall semester at Albion, and the College, with help from the school’s astronomy club and the backing of Zellner, will chronicle it all.

If it’s a clear day, several telescopes will be used for safely viewing the eclipse on the roof of Palenske Hall. Viewing begins at 1 p.m. ET and will continue to approximately 3:30. Solar eclipse glasses will also be provided.

“It will be a game-day decision on the part of the students,” Zellner said. “If it’s a clear day and they anticipate hundreds of people, plans are to move some of the telescopes to the Quadrangle.”

Zellner said the event will go on as long as a person's shadow can be seen at 1 p.m., the start time of the event. 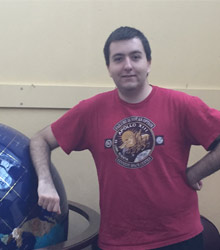 Antoniu Fodor, '18, is a math and physics major who has helped coordinate the solar eclipse public viewing on August 21 as part of the College's astronomy club. The eclipse, set for 2:27 p.m. ET, will turn daylight to dusk and Albion will have several telescopes set up to view the event.And while Michigan won’t see the totality of the eclipse, it will see nearly 90 percent and at its maximum, around 2:27 p.m., daylight will turn dusky and remain that way for about two minutes. There will also be a livestream of the eclipse presented in Room 101 of the Norris Center. The Albion observing event is free and open to all who want to witness the experience.

“For the solar scientists, this is a rare chance to be doing their kind of science,” said Zellner, who specializes in lunar science and will be watching in Wyoming, when the eclipse occurs. “There are solar eclipses every year but for scientists in North America, this is a chance to look at the solar corona, the solar chromosphere—the parts of the sun that are otherwise unobservable.”

Zellner also believes this is great way to spark interest in astronomy.

“This is a good way to get into the habit of doing good work for the community with science,” she said. “It’s really a service for the campus and the community. This is a once-in-a-lifetime experience.”

In charge of the Albion event will be Madelin Darby, ’20, and Antoniu Fodor, ’18, members of the astronomy club. Fodor, a physics and math major from Macomb, Mich., has coordinated things from the campus since he’s been here all summer as a resident assistant.

With the help of members of the College’s Education Department, he has sent out word to local schools, inviting them to come to the event and hopes, like Zellner, to spark an interest in science. As well, the hope is that students on campus will stop by and take a look. Fodor says as far as he knows, there are no other eclipse viewings being held in the immediate area.

Fodor also views the eclipse, which will start in Oregon and sweep east through the Midwest (totality will occur in Southern Illinois) and over to South Carolina, as an experience to be remembered.

“For me it’s very humbling,” he said. “You see these giant celestial bodies in alignment and it’s so much different than seeing it online. It’s kind of a connection with you and me and how small we are. It’s magical.”