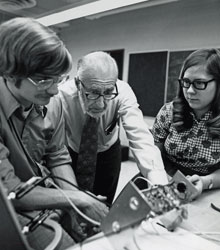 Physics emeritus professor Howard Pettersen, aged 91, passed away February 17, in Madison, Wisconsin. He is survived by his wife, Ginny, a former staff member in the Art and Art History Department, their three daughters and four grandchildren. A memorial service will take place March 2 in Madison.

Pettersen was just 27 when he began his 38-year Albion College tenure in 1949. A graduate of Whitman College, Pettersen came to Albion with a master's degree earned at the University of Minnesota. Pettersen completed a doctorate in physics in 1969 from Michigan State University.

Pettersen served as Physics Department chair for many years. As a Fulbright Teaching Award recipient, Pettersen spent a semester at the University of Cologne, Germany, where he also collaborated on some crystallography research.

"When Marty Ludington and I began teaching in the late '60s, Howard was always available for mentoring," recalls emeritus professor Dave Kammer. "The first couple of years were very stressful and 80-hour weeks common. One semester Howard took over one of my assigned labs just to give me some relief, a very much appreciated gesture. 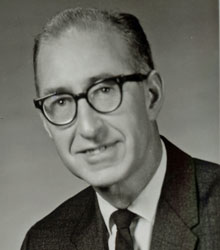 "He also liked to do the outreach for the department, attending and serving as an officer in the state American Association of Physics Teachers, the national organization dedicated to physics teaching in higher education," Kammer said. "Howard established a regular meeting of the area high school physics teachers where ideas for teaching were discussed and demonstrated. It was very successful and also helped in our recruiting good students."

Pettersen was an avid sailor, spending many summers teaching swimming and water safety and physics at Albion College's Bay View summer school. He also taught CPR and first aid with the Calhoun County Red Cross for nearly 50 years. He received that organization's "Betty Beese Safety Award" in 1984. Pettersen was also an EMT and served as president of the Albion Ambulance Service.

Although Pettersen retired while physics professor Aaron Miller, '95, was still in middle school, Miller remembers Pettersen as an important part of his college years. "Howard and Ginny were some of the first in the greater Albion community to have us over for non-Baldwin, home-cooked meals and have some wonderful discussions on so many topics," Miller said. "When I came back and joined the faculty, Howie did bequeath some of his treasured physics book collection to me. The Pettersens treated us as cherished guests in their home and as intellectual peers. My wife (Holly Buege Miller, '96) and I loved the time we spent with them."

"Dr. Pettersen's work on behalf of the College and the community illustrate why Albion is such a special place," said Albion College President Donna Randall. "Our faculty are not simply committed to their classrooms or their research, but to making our community better for everyone. Professors like Howard Pettersen provide important lessons and their impact on hundreds of alumni cannot be overstated."