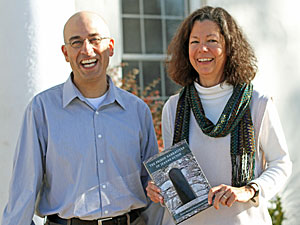 Ronney Mourad and Dianne Guenin-LelleJeanne Guyon—wealthy widow in the court of Louis XIV, imprisoned for heresy and her friendship with a powerful cleric—is not the heroine of a historical novel, but the real-life subject of years of scholarship done by French professor Dianne Guenin-Lelle and religious studies professor Ronney Mourad. Their work has resulted in two new books, Jeanne Guyon: Selected Writings, released by Paulist Press, and The Prison Narratives of Jeanne Guyon, published by Oxford University Press.

The two books represent Guyon's importance both to French history and religious scholarship. During her lifetime, Guyon was an influential mystic "almost seen as 'going rogue'" by the Catholic church and the French court, explained Guenin-Lelle.

Guyon's imprisonments, officially for heresy, hypocrisy and other infractions, were in fact largely political in nature: her punishment was also a surreptitious attack on Francois Fenelon, France's second-most influential cleric. An outspoken critic of the French nobility and court, the powerful Fenelon shared his views with the king himself. Unable to attack Fenelon directly, his enemies persecuted Guyon, Fenelon's close friend.

Reading Guyon's prison narratives against court history, "it becomes clear that whenever Fenelon would make transgressions within the court, Guyon would be punished," Guenin-Lelle explained. "He couldn't be punished because of his place in society, but they could get to him through her. Our research reveals a much more complex relationship between Guyon and Fenelon and how her suffering was related to his activities."

Guenin-Lelle and Mourad's translation of Guyon's Selected Writings proved to be a monumental task. "Every sentence was a challenge. We could spend an hour discussing just one word," recalled Mourad. The word-by-word discussions allowed the pair to pool their expertise and produce writing that would be useful to religious scholars and Guyon devotees alike. "Dianne contributed a deep knowledge of 17th-century French, while I helped make sense of Guyon’s mystical terminology and religious context,” Mourad said.

Translations of some of Guyon's devotionals are still popular among contemporary Christians; Guenin-Lelle was introduced to Guyon when she bought a book of her devotionals at a Quaker conference, and she and Mourad were asked to produce a larger volume than the one originally submitted to the publisher. "She was an important court figure whose writing is still of interest today," Guenin-Lelle commented.

Guyon produced some 40 volumes of mystic writings; those and some positive reviews have Guenin-Lelle and Mourad considering further collaboration. "This kind of scholarship might only be possible at a place like Albion," Mourad said. "At a bigger institution it would be difficult to come up with a fruitful collaboration outside of your department. This speaks well to the faculty culture we have."